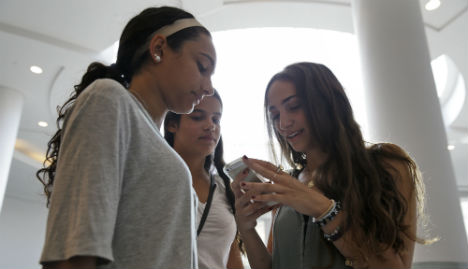 Could this be the end of teens permanently stuck on social media. Photo: Seth Wenig/AP
The Swedish government on Friday said it would shortly launch a commission on implementing the EU Data Protection Directive, which would discuss where Sweden should set its age limits, which according to the European Union's new law must be between 13 and 16 years of age.
Consumer Minister Per Bolund (MP) told Aftonbladet that be believed the new regulation could have beneficial effects.
“If this gets more parents involved in what their children do online that's fine,” he said.
But he also stressed that Sweden had no choice but to enact the controversial regulation, which has been brought into European law in the face of staunch opposition from US social media companies, for whom teenagers are a key market.
“The decree which was made at the EU level says that there should be a 16-year age limit, with the possibility of going down to a 13-year age limit,” he told SVT. “This is a binding decree which must at some point enter Swedish law.”
Under the regulation, children below the age threshold would be required to ask parents or guardians for permission before signing up to social media sites.
At present, there is a 13-year age limit for someone to open an account on social media sites such as Facebook, Instagram and Snapchat, but the limit is only imposed as part of the user agreement people must click to open a new account.