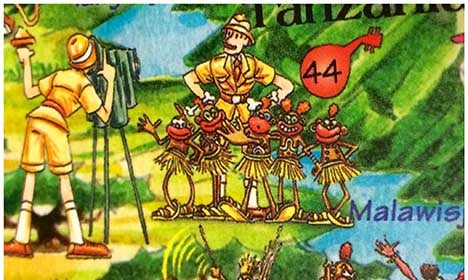 A picture of the controversial map. Photo: Peter Lööv Roos

Available to schools across Sweden, 'Barnens Världskarta' ('children's world map') is a popular map depicting the world's countries and nationalities in what the publishers behind it, Beta Pedagog, describe as “a humorous, caricature-like” manner.

But not everyone agreed. Swedish father Peter Lööv Roos told The Local he was stunned when his daughter showed him a copy hanging in her school earlier this week.

“I just stared at it (…) It wasn't just one racist image, it was several. How was that possible? In a school where around half of the pupils are from non-European backgrounds. My daughter is born in Ethiopia.”

He explained that the map was taken down after he spoke to the teacher.

“When my daughter had left the teacher came by. I tried to explain it as pedagogically as possible, and the teacher did change their mind. 'I think I understand now,' said the teacher. 'I'm embarrassed I didn't listen to your daughter.' (…) The teacher deserves cred for that. It felt very good to my daughter, I could tell.”

The map has been sold to schools by Beta Pedagog for the past five years. But after Lööv Roos posted pictures of it online, which were shared widely on Facebook in Sweden, it announced it would stop using it.

Liliane Marchert Olsson of Beda Pedagog told the Dagens Nyheter newspaper, which was first to report the story, that the map used by the school was an old version from 2010 which had since been altered, but added that they would stop selling it altogether after several people had been in touch.

“We don't want to contribute to anything that seems offensive to people. If people have opinions on our products we of course choose to accommodate those opinions,” she said.

However, Lööv Roos still criticized the fact that it had been printed at all.

“If the world map had been from 1910, but it was printed 2010! Describing it as 'humorous', is to me and my daughter unbelievable. I don't think they meant to offend, but they undoubtedly did. It's good that it's gone, but I don't understand how anyone could have missed what's racist, how it reproduces racist stereotypes. And many teachers should probably listen to the children a little bit more. Listen a lot more.”