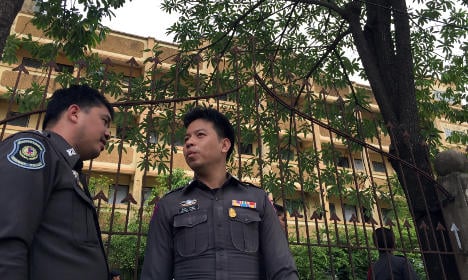 Gui Minhai, a Swedish national, went missing from his seaside apartment in the resort city of Pattaya in October.

He was one of five people from a Hong Kong publishing house known for producing salacious titles critical of Chinese leaders to have disappeared in recent months as Beijing pursues dissidents far beyond its borders.

“They came here, not for investigation because they have no legal rights to do so. But they have been sent to help expedite the Thai police investigation,” he said.

Major General Apichart did not comment on the reports, nor did the Swedish Embassy in Bangkok.

Gui is one of at least three Beijing critics who have disappeared in recent months in Thailand, raising alarms that Thai military rulers are secretly sending dissidents back to China or allowing the Chinese free reign to pursue them on Thai soil.

After nearly two months of silence, Chinese state TV earlier this month broadcast a video of Gui confessing to a years-old mainland drink-driving offence and saying he did not want Stockholm to interfere with his case.

Dahlin, of the Chinese Urgent Action Working Group, returned home to Sweden on Tuesday after being held by China for allegedly posing a threat to national security.

China-born Gui and his four missing colleagues were rumoured to be preparing a tell-all book about the love life of President Xi Jinping.

One of his publishing house co-workers, British citizen Lee Bo, disappeared from Hong Kong, fuelling concerns freedoms in the semi-autonomous Chinese city are being eroded.

The others are believed to have been apprehended in southern China.