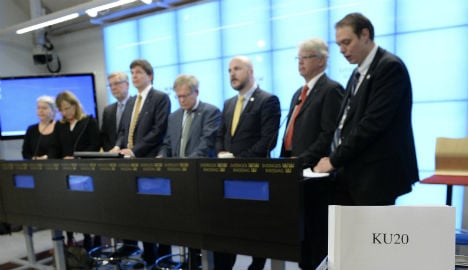 Jonas Millard MP (right) with other members of the KU scrutiny committee in 2015. Photo: Bertil Ericson/TT
Jonas Millard, an MP for the anti-immigration Sweden Democrats and member of the Constitutional Committee (KU), confirmed the plans as he announced that his party would report both men to the committee.
“In a sense it is both the present and the previous government who bear responsibility for the situation that has arisen,”  he said.
“We will send a battery of questions to both the current and previous governments,” he told the Dagens Industri newspaper. “Ultimately, it may also be the case that we call both Stefan Löfven and Fredrik Reinfeldt to hearings. We may also request documents which are not public.”
The Sweden Democrats’ move follows similar actions from the centre-right Moderate Party, whose parliamentary leader Jessica Polfjärd, on Friday morning asked for the current prime minister Stefan Löfven and a several other government ministers to be investigated.
Later that day, Hans Hoff, a Social Democrat MP, responded by reporting former centre-right prime minister Fredrik Reinfeldt of the Moderate Party to the committee, citing a speech he had made on the rising number of asylum cases in 2014.
The Sweden Democrat's referral came as anti-immigration campaigners from the party organised a street protest in central Stockholm earlier on Saturday where they called on the government to resign over its handling of last year’s refugee crisis.
The demonstration came to an end at 2.40pm when a deployment of police escorted the anti-immigration campaigners and the left-wing counter demonstrators from Norrmalmstorg in central Stockholm.
According to the Expressen newspaper several demonstrators were restrained by handcuffs, and ten police vans and a police helicopter were present to monitor the protest.
“There was a drug offence, an attempted assault, and we also filed a report because the demonstration was not authorised,” Kjell Lindgren from the Stockholm police told Expressen newspaper.
Speakers at the demonstration included Gothenburg priest Axel W Karlsson, who was in 2014 expelled from the Sweden Democrats for his articles in the far Right Nya Tider magazine, and Hans Erling Jensen, who was expelled from the party for his extreme views on Islam.