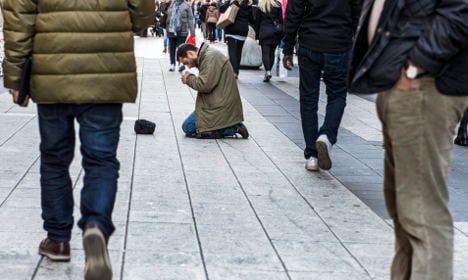 “I don't think [giving money to beggars] is what helps individuals out of deep poverty in the long run. I really believe that the money is more useful with organizations in the countries of origin,” he said.

Sweden has experienced a surge in EU migrants – mostly part of the Roma community from Romania and Bulgaria – begging on streets around the country in the past year.

“We see that the number of vulnerable EU citizens have increased sharply. It's EU citizens who don't have the right to welfare in Sweden. In 2015 there were up to 5,000 vulnerable EU nationals in Sweden with a small dip after the summer. Of those around 70 are children,” said Valfridsson.

He also suggested that offering places in schools to children of EU migrants could lead to more vulnerable families bringing their children to Sweden while begging in the Nordic country.

“I don't think we should generally offer schooling to these children,” he said. The debate about Roma beggars came to a head at the end of last year, after a controversial migrant shanty camp in Malmö was torn down by police.

“That creates new difficulties. Society helps reestablish those slum communities we have worked so frantically to get rid of. The message is that you're allowed to come here, but if you do you must live here legally. Society must have a strict approach to that you're not allowed to settle on someone else's land,” he said.

He also suggested that the government task Stockholm's county council with coordinating with other local authorities across Sweden to help spread information and assist officials in the work with vulnerable members of the EU migrant community.

The government is next set to consider the findings of the inquiry, which did not propose a change in legislation.

“Since we took office we have worked hard nationally and at EU level to limit and stop begging,” Regnér told reporters at the press conference.