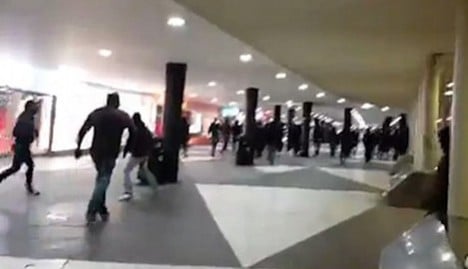 A total of 14 people are being held on suspicions ranging from plotting assault to attacking police officers following Friday's mass violence. Police have linked the incidents to an anti-immigration protest held on Saturday, at which a number of people also reported they had been assaulted.

“It's important to get a picture of what happened and who the various actors are. Is it a trend or a one-off incident?” commanding officer Christer Birgersson told the TT news wire.

He would not reveal how many officers would be part of the special force, which will move around central parts of Stockholm to areas where they suspect that mobs may strike.

Meanwhile, police are taking a closer look at the weekend violence to help prevent future incidents. Birgersson said that they are investigating information that some of the attackers were linked to football hooligan groups and others to far-right extremism organizations.

Officers are also trying to track down the young refugees believed to be victims of the assaults, none of whom have reported the alleged attacks to the police.

“We have video footage that we're looking at to see if we can spot any crimes being committed. If we do we will try to find both perpetrators and injured parties,” said Birgersson.

Friday's march was the most extreme reaction seen so far to the murder last week of social worker Alexandra Mezher, and saw vigilantes claiming they were acting to “protect Swedish women”.

According to Aftonbladet newspaper, men were distributing leaflets on Friday evening with the slogan “It’s enough now!” which threatened to give “the North African street children who are roaming around” the “punishment they deserve.”

On Saturday at least three people were arrested for assaulting counter-demonstrators after members of neo-Nazi groups and hooligans gathered in the capital's central Norrmalmstorg square to take part in an anti-immigration demonstration.

However, ordinary Swedes were quick to distance themselves from the violence and the protest, with a social media hashtag campaign called #inteerkvinna (#notyourwoman) trending after women posted pictures of themselves on Twitter alongside messages saying “not in my name”.