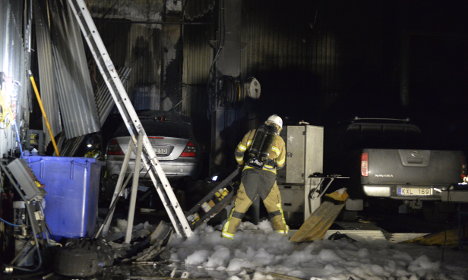 The fire in Järfälla, Stockholm, on Wednesday. Photo: Anders Wiklund/TT

A total of 16 units from the fire and rescue services were called out at just before 3am to put out the flames in the Swedish capital. Four hours later they reported that the building, which contains a vehicle safety testing centre, was still burning, but that the blaze was under control.

“It looks favourable and we're stepping down our resources. The fire has kept to the operation room and the roof above. We have managed to stop it spreading along the roof,” Stockholm emergency control room officer Göran Norman told the TT newswire. Firefighters at the building in Järfälla on Wednesday. Photo: Anders Wiklund/TT

Meanwhile, in western Sweden, police were investigating a suspected arson after a barn in Gothenburg's Hisingen suburb went up in flames on Wednesday morning. According to guards homeless people had previously used the building as temporary overnight shelter.

Police said that they did not rule out that anyone had been injured in the fire.

“There is information that people have been seen near this barn, and that's what makes us unsure of whether or not anyone was inside,” said police spokesperson Christer Fuxborg.

There was never any risk of the fire spreading to nearby buildings, he added.