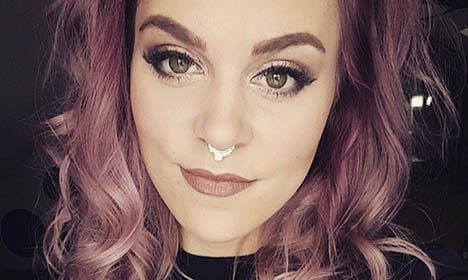 Moa Karlsson met the man who robbed her. Photo: Private

When Moa Karlsson, 24, worked at a petrol station in Swedish town Uddevalla, she became the victim of two robberies within seven months. She has now spoken to The Local about what it felt like to come face to face with one of them for the first time since the trial.

“It felt really good to meet him. I was of course nervous, but everything was well prepared and my best friend Amanda was with me the whole time,” Karlsson said on Wednesday after first speaking to Metro.

Mediation, or 'medling' in Swedish, lets the victim and offender sit down and talk face to face. Since 2008, all municipalities are obligated to offer it in cases where the perpetrator is younger than 21. The idea behind it is to decrease the risk of re-offending and to give the victim a chance to get closure.

The two robberies took place between April and November four years ago. The first case was dropped but the second time a young man, who had held a knife to Karlsson's throat and forced her to open the cash register, was sentenced in court.

“During the trial I showed that mediation was something I would be interested in. The offender was also positive about it,” Karlsson explained.

“After that, my lawyer passed it on to those who are responsible for the mediation,” she continued.

Karlsson explains that the meeting gave her a chance to get answers to the many questions she had.

“We talked about a lot when we met. We told each other about our backgrounds and also how we experienced the robbery and also, of course, what the time after the incident has been like.”

For Karlsson, the meeting was crucial for her to move on. The second robbery gave her post-traumatic stress disorder (PTSD), which made her avoid being around people and avoid everything that reminded her of the robbery.

“It feels good to have talked to him, and I got answers to all of my questions and I am no longer afraid of him. Of course, the whole thing has led to me being more worried for a long time, but the fear of him disappeared,” Karlsson told The Local.

Piece by piece, she has begun to put her life back together. She is no longer working at the gas station. Instead she has made her career as a make-up artist, running her own company 'Face of Nanny'.

She explains that the PTSD and everything she went through made her lose friends, because she was more focused on working than partying with friends.

“Today I know who my real friends are and I am following my dream working as a make-up artist in my own company,” she says.