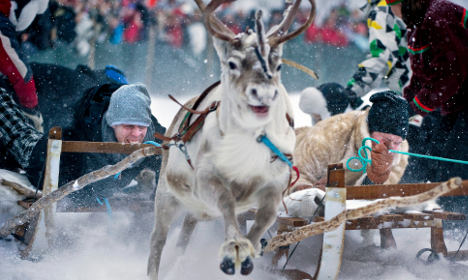 In an encouraging precedent for other minority communities, the Sami village of Girjas won the right to administer hunting and fishing on its own territory in a ruling by a tribunal in Gällivare, northern Sweden.

The decision was welcomed with “joy, astonishment and relief” by the Swedish Sami Federation (SSR), which nevertheless cautioned in a statement that it was only a “partial victory”.

Swedish authorities will likely appeal against the ruling. The justice ministry said it would react after having “studied the judgement in close detail”.

Girjas, a village of reindeer herders whoe territory covers some 5,500 square kilometres in Lapland, filed legal action in 2009, supported by the SSR.

The Samis are contesting a 1993 land reform which extended rights to non-Samis to hunt and fish on their territory.

After years of stalling, the Gällivare tribunal found in their favour and ordered the state to pay their legal fees of some 7.2 million krona.

The Samis, who have lived in Scandinavia since the last Ice Age over 10,000 years ago, “have an exclusive right to hunt small game and to fish” on Girjas' territory, except for on arable land, the judges said.

“We have concluded that the Sami village has for long – as much as a millennium – enjoyed the use of this land for hunting and fishing,” said judge Christer Thornefors, cited by the TT news agency.

The ruling is in line with Swedish law, which enshrines the principle that allows rights which have long been exercised de facto to be made permanent.

Sami elders dream of also applying the principle to disputes between them and mining companies keen to get their hands on Lapland's precious mineral resources.