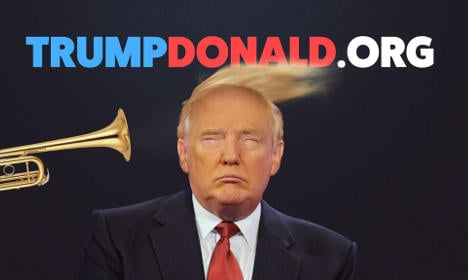 'Why Donald Trump when you can Trump Donald?' is the slogan used by the site, which has quickly become a viral hit.

On Thursday, #TrumpDonald was trending ahead of #DonaldTrump on Twitter in Sweden. One social media user described it as the “best thing on the Internet”, while the site was also written about in both Swedish and international media.

Even Spotify founder Daniel Ek came out as a fan of the game.

Haha this is hilarious! Blow a trump on Donald Trump. https://t.co/Ez6qonY5UP

Visitors to TrumpDonald.org can click on a trumpet to blast the presidential candidate, sending his famous hairstyle flying and creating a pained facial expression. As users reposition the trumpet, his eyes follow it around the screen – occasionally, it even blasts him with red, white and blue confetti.

Jacob Sempler, a creative designer at the Swedish advertising agency Animal which is behind the site, told The Local more.

“We just came across the domain name and saw an opportunity to make use of it,” he said.

He explained that the site took a while to perfect, because it was “fairly complex to work with Mr Trump's hair”.

Sempler suggested he been “blown away” by the global reaction – much like Trump himself on the website.

He said: “It seems like a lot of people in Sweden are following American politics. Obviously Swedes can't vote in the election, so creating this site became our vote; it's our way of commenting on the election.”

Sempler lived in New York for six years and has previously been involved in viral campaigns; his mission to make New York the first city with its own domain name (.nyc) became reality after four years. More recently, creative traffic signs which warned against 'smartphone zombies' were a viral hit in the Swedish capital – before they were taken down that same day by authorities.