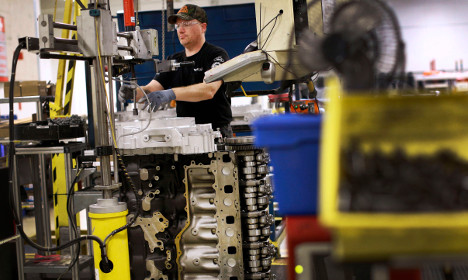 A Volvo trucks plant in the US. Photo: AP Photo/Patrick Semansky

The profit margin of the Gothenburg-based truck maker, second in the world only to Germany's Daimler, rose to over 8 percent from 3 percent the previous year.

“This was thanks to cost reductions, but was also helped by positive currency development and capital gains from selling shares,” chief executive Martin Lundstedt said in a statement.

Fourth-quarter operating income, at 5.4 billion kronor, however came in below expectations from analysts polled by Swedish financial agency Direkt.

In 2015, demand in the truck market improved in Europe but declined from high levels in North America, Lundstedt said.

This, coupled with weakness in the Brazilian market, was going to prompt production cuts, he said.

Volvo is at the end of a three-year restructuring programme which it said has reduced overheads by 10 billion kronor annually.

Sales rose 9 percent in 2015 partly thanks to weakness in the Swedish currency, which gave the headline figure a boost once income from other currencies was converted into kronor. Stripping out the currency windfall, sales were up 2 percent.

Volvo Group is separate from the Volvo Car Corporation.