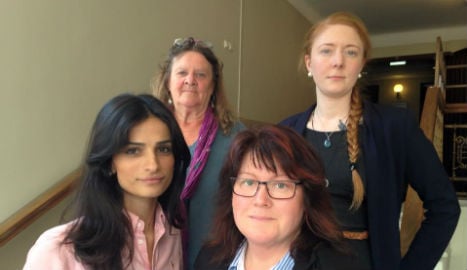 The board of Swedish women's refuge lobby Roks. (Zozan Inci front left). Photo: Roks
“Evidently the UN thinks that the justice of the women who have been assaulted and raped is less important than the right of a possible offender to walk freely in the streets,” Clara Berglund, General Secretary of the Swedish Women’s Lobby, told The Local.
“We are really angry here at Roks,”  said Zozan Inci, the chairperson of Roks, a lobby group representing shelters for women affected by male violence. “There is a girl in Sweden who’s been [allegedly] raped. He needs to come here and go through the process that everyone else goes through.”
“What disturbs me is that the UN is putting men's human rights before women’s human rights — as they always do in these situations. That’s what makes us very upset here at Roks.”
The UN Working Group on Arbitrary Detention, an independent panel of experts, ruled in a statement on Friday that the Australian former hacker had been “arbitrarily detained by the governments of Sweden and the United Kingdom”.
The panel demanded in its statement that Assange's detention “should be brought to an end, that his physical integrity and freedom of movement be respected, and that he should be entitled to an enforceable right to compensation.”
Inci argued that Assange's three and a half years in the Ecuadorian embassy should be irrelevant to whether he should still face trial in Sweden.
“Anyone could do that. You can go and rape someone and hide for three years and then the UN will tell the world 'you can release him now'.”
The activists' anger was seconded by Elizabeth Fritz, the lawyer for the woman who has accused Assange of rape.
“That a man who is wanted on an arrest warrant for rape should be awarded compensation for intentionally hiding from the judicial system for more than five years is offensive to my client and to the human rights of all victims of crime,” she said in a statement.
In August 2010, two months before WikiLeaks began publishing a haul of 251,287 US diplomatic cables, two different Swedish women went to the police accusing Assange of sexually assaulting them during a visit to the country that month.
Later that month the Swedish Prosecutor's Office issued an arrest warrant for Assange on allegations of rape and sexual molestation, allegations Assange denied.
He shortly afterwards moved to England, refusing to return to Sweden to be interviewed by the prosecutor, citing fears he would be arrested, put into pre-trial detention, and extradited to the United States.
The freedom of information activist has been unable to move freely ever since he was granted bail by a British court in December 2010, when he was confined to Ellingham Hall, the Norfolk manor owned by his supporter Vaughan Smith.
In June 2012, after the British Supreme Court ruled that Assange should be extradited to Sweden to face charges, he sought asylum in the Ecuadorian embassy in London, where he has remained ever since.
Berglund said that the UN panel in its ruling was failing to uphold several of the principles in its own Convention on the Elimination of all Forms of Discrimination Against Women.
“It seems like the UN has forgotten about it own convention, the CEDAW,” she said.