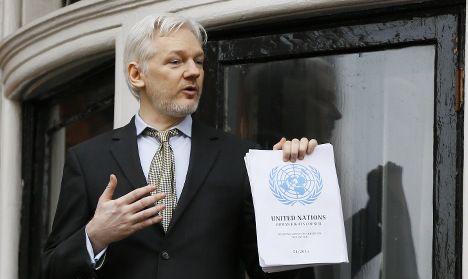 Wikileaks founder Julian Assange holding a U.N. report on the balcony of the Ecuadorean Embassy in London. Photo: Katy Wrigglesworth/AP

The WikiLeaks founder, who faces a rape allegation in Sweden, urged Britain to let him walk free from Ecuador's London embassy following the panel's findings Friday.

The 44-year-old Australian, who has been in the embassy for approaching four years, has refused to go to Sweden, fearing deportation to the United States over WikiLeaks' release of 500,000 secret military files.

“So that settles it then — everyone's to blame except Julian Assange,” wrote Marina Hyde in The Guardian.

“It is notable with Assange that the higher he has gone in his 'quest for justice', the smaller he has looked,” she wrote.

“For my money he looks more and more like just another guy failing to face up to a rape allegation.

“Given the UN panel is made up entirely of academics, seemingly devoid of judicial experience, nor any in either public international law or asylum/refugee law, its institutional competence verges on the intriguing.”

Siobhan Fenton wrote in The Independent: “We have no idea if Julian Assange is a rapist — so why are we are so opposed to finding out?”

“For many, it seems that his work with WikiLeaks makes him above the law — and makes it impossible for him to have committed sexual assault,” she wrote.

“The dramatic charade of the last five years perfectly illustrates how, when it comes to sexual violence allegations, our society and some of our most important international institutions are still skewed in favour of privileged men.”

The newspaper's main story on Assange said it had seemed for a few hours that he might leave the embassy in the hope that British police would not arrest him.

“Instead, the 44-year-old Australian was faded into vision via a videolink,” it said.

The Daily Telegraph's story said the United Nations had been ridiculed over the findings of its experts.

The Times said the UN panel had also accused Ecuador of routine torture and arbitrary detention.

“The 2006 mission recorded evidence of torture and violence by police and the absence of records showing how many people were being held by authorities,” it said.

The Sun's headline said: “How dare they? Fury as UN panel demands Britain pay Julian Assange compo (compensation) after he hid from justice for three years.”