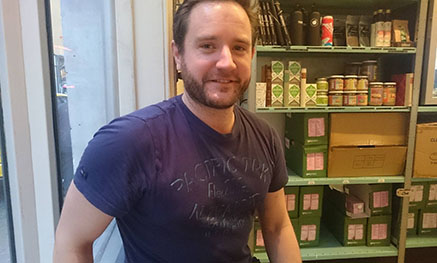 It is a truth (more or less) universally acknowledged that if you meet a Swede, you will at some point end up in Sweden. And after four years together, Wallace and Sofia decided to start a new life in Stockholm.

“We sort of decided to give it a go here,” Wallace tells The Local as we meet him at the bustling smoothie and juice bar he today runs in the Swedish capital's busy, hipster-ish, Södermalm district.

It was his go-getting spirit which helped him first land a job with the chain, based at six spots around Stockholm, exactly a year ago.

“I met Niklas, one of the owners of Juiceverket, at Hornstull [an area in Södermalm]. I walked in and had a chat with him. I said what I’ve been up to and what my experience was,” Wallace explains. Five months later, Wallace became manager for its branch in one of Södermalm's most bustling areas. His roles include looking after the store, managing the bar and coming up with new drinks for the eclectic menu. How about a parsnip-apple-fennel-mint-spinach blend? Or apple, ginger, raspberries and lemon?

He acknowledges that many may find it harder to get a job in Sweden, and believe that his previous experience working in cocktail bars helped him get the job at the juice bar.

“I mean I was pretty lucky. I sort of just walked into it really. I used to run cocktail bars in my twenties when I was in London, so that’s my sort of experience, with good drinks and things like that,” he says.

In his spare time Wallace puts most of his effort into learning the Swedish language, which he thought would be easier to than it turned out to be.

“It comes along a lot slower than I thought it would, because everybody speaks English, obviously, so well,” he explains.

But Wallace is not one for giving up. He has signed up for a Swedish course at adult learning centre Folkuniversitetet, starting in a couple of months, firmly believing that language is key to integration.

“I think Sweden is one of those societies you can easily fit into, but I think you live on the surface a little bit unless you learn the language and get involved,” he argues. Some of the juices the bar offers. Photo: Juiceverket.

Coming from across the world, Wallace has had his fair share of culture clashes since moving to Sweden. One of them is confronting the typically Swedish mindset of personal space and being just a little bit hard to get to know.

“I’ve got a lot of regular custumers and it takes a while to get to know people. You've got to chat to them on a day to day basis. Because Swedes are kind of closed and sort of reserved when it comes to chatting I suppose, which is a very different culture from where I come from,” he says.

“But once you start to get to know them, the barrier comes down quite a lot.”