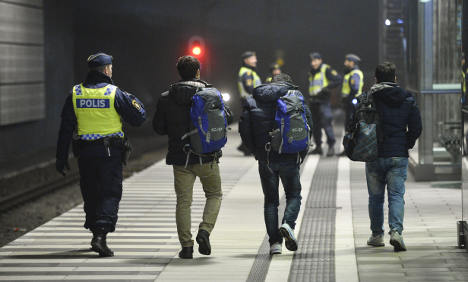 Immigration has overtaken education as the single most important issue for voters selecting a political party, a new poll for Swedish newspaper Dagens Nyheter (DN) by Ipsos suggests.

The poll shows that 40 percent of Swedes selected 'integration and immigration' as the key political topic when deciding who they would vote for if there was an election. This compares to 20 percent in June 2015 and just five percent in 2010.

“It's the biggest change for an individual issue we've ever seen in our measurements,” Johanna Laurin Gulled, a spokesperson for Ipsos, told DN.

The poll also suggests that only 17 percent of voters think that Prime Minister Stefan Löfven's Social Democrat party has the best policies on immigration. Meanwhile, 21 percent favour the approach of the nationalist Sweden Democrats.

“There is a favourable position for the Sweden Democrats, who own the question which now ranks as the most important to voters,” said Gulled.

The poll comes as Sweden's centre-right parties seek to toughen their approach to immigration, with the largest opposition party, the Moderates, last week suggesting an “asylum pause”.

However according to Ipsos' results, this is not having an impact on their popularity in this area, with just 13 percent of voters suggesting the Moderate party has the best immigration policies.

Education was bumped into second place in the list of concerns, with 18 percent selecting 'schools and training' in the survey.

The representative survey was carried out at the end of January, following a year in which Sweden took in a record 163,000 asylum seekers.

Around 100,000 more refugees are expected to travel to the Nordic country in 2016, according to a recent forecast by Sweden's migration agency.