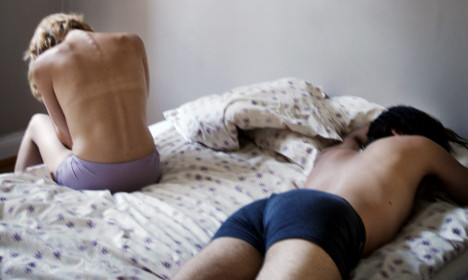 File photo of a couple in a Swedish apartment. Photo: Sandra Qvist
Swedish police have spoken out about growing numbers of prostitutes using sublet apartments to charge for sexual services.
According to Simon Häggström, head of the Stockholm police unit leading investigations in the capital, prostitutes are active at around 200 addresses on a typical day in the city, with hotels no longer their accommodation of choice.
“Second hand apartments are now the largest market for prostitution in Stockholm,” he told Swedish newspaper Dagens Nyheter (DN), which broke the story.
The police officer explained that many of the hookers were using properties that had been advertised on sharing economy sites such as Airbnb, with pimps creating fake profiles of respectable couples purporting to be the renters.
“People are naive. They should think of some more about who they rent out to second hand,” he said.
He explained that the police team currently had four members and said that he was pushing for more resources to expand its work in the wake of the rise in Airbnb hookups by sex workers.
A press representative for Stockholm police told The Local that no one from the unit was available to expand on the revellations featured in Dagens Nyheter until later in the week.
Pye Jakobsson, a spokesperson for Rose Alliance Sweden, which campaigns for the rights of sex workers, said it was “probably” the case that prostitutes had started using Airbnb rentals more frequently.
She linked this to the acute housing shortage in Stockholm and a recent local government and police initiative training hotel staff in how to spot prostitutes.
“I would say it might be a result of the police's big push to train hotel staff – so that's out as an option. You don't want to work from home as that means risking to lose your apartment and outcalls some feel are riskier than incalls,” she told The Local. Sweden has some beautiful apartments, but policea are worried about sex crimes behind closed doors. Photo: Ola Ericson/Image Bank Sweden
Airbnb issued a statement on Monday afternoon, arguing that it had a “zero tolerance policy” on sex crimes.
“Over 70 million guests have stayed with Airbnb, and problems for the hosts and guests are incredibly rare. If problems arise, we work quickly to take care of our hosts and guests and to permanently shut down users who abuse our platform and community,” said the text, which was emailed to The Local.
Qasa, a Swedish startup which connects would-be subletters with people seeking to rent out their apartments, also waded into the debate, contacting Swedish media to say it was “concerned” by the image that the coverage was painting of the rental industry.
“What we want to do is to increase security around subletting,” its chief marketing officer Henrik Hoffman told The Local.
“I use Airbnb when I travel but I can see that there are some potential problems when people are only renting out an apartment for one or two days.”
He said he wanted to reassure customers using Qasa – which specialises in longer contracts – that the firm was committed to their safety, for example by asking both parties to sign paperwork in advance and keeping a log of their Swedish personal numbers.
It is not illegal to sell sexual services in Sweden, but in 1999 the Nordic nation became the first place in the world to criminalise buying sex, in a move designed to punish clients rather than those working in the industry.
The law helped halve the number of streetwalkers in Sweden's cities by 2010, but the country is still facing a growing problem of sex sold over the internet and via mobile apps.
Häggström told DN on Monday that many of the prostitutes are young women trafficked to the Nordics from eastern Europe.
He said that new sites advertising their services, often servers based abroad, can “pop up like mushrooms and can disappear just as quickly”. But he added that his unit had managed to “put out a few” in recent months.
CRIME
Swedish movie star and dozens of sex buyers seized in Stockholm raids