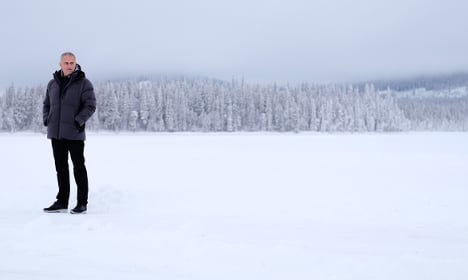 Residents in Arjeplog in the far north of Sweden, where temperatures regularly drop below -20C or even colder in winter, probably did not raise an eyebrow at the mercury edging all the way up to a very unimpressive -4C on the day of the world famous football boss' visit.

But to Mourinho, who visited to shoot an action-filled commercial video for car makers Jaguar to help promote one of their new videos, it was more than he could take.

“I remember playing a match in Russia. It must have been -10C, so cold that some of the players were crying. We thought that one of the linesmen had died,” he reminisced in an interview being shared in Sweden on Monday, published by the GQ magazine.

The video sees the currently unemployed coach – who was fired from UK premier league football club Chelsea at the end of last year – behind the wheel of the SUV, skidding and sliding across the ice on the frozen-over lake Hornavan at Arjeplog on his January visit.

“Look at the nature. My football world involves thousands of people, and we travel to the biggest cities. So to come here, it's an empty place, but it's so full of so many things. I just love it,” the 53-year-old told the men's lifestyle magazine about his encounter with the frozen landscape.

“I know it's very cold, I know that I would not survive outside for many hours here, but the experience is magnificent, the beauty is fantastic. For people in my world, a few days in a place like this is amazing,” added Mourinho, who did not appear to be contemplating a career in the Nordics.

READ ALSO: How to act like a true Swede in winter

Should he change his mind, there may just be a spot open. Sweden's national team coach Erik Hamrén announced last Monday that he would be stepping down from the post at the end of summer no matter how well his team perform in the Euro 2016 finals held in France.

Temperatures were creeping upwards in Sweden on Monday after the country experienced a cold snap earlier this winter, with the western city of Gothenburg battling its worst snowfall in a decade and northern Naimakka beating the millennium cold record with -42.8C.