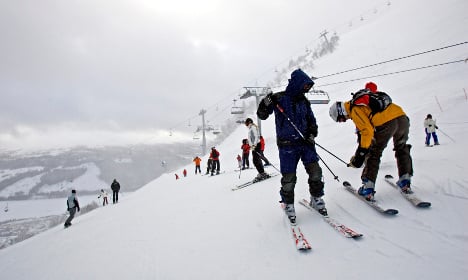 Ski tourists at one of the resorts in Åre, Jämtland. Photo: Pontus Lundahl/SCANPIX

A total of 37,808 cases of the sexually transmitted disease (STD) were reported in Sweden in 2015, the highest number in seven years, reported the Metro newspaper on Monday.

Of those, the per-capita majority does not live in one of Sweden's big cities. Instead, the top spot is claimed by Jämtland county in the north-west, a mainly rural region known for its many snow sport resorts.

“On my positive days, I believe it is because we carry out a lot of tests and have a committed team of health workers. On my darkest days I think it's because we have a lot of unprotected sex,” Karin Wåhlén-Götzmann, Jämtland county's coordinator for sexuality and health, told The Local.

Wåhlén-Götzmann mentions two possible reasons: the university in Östersund, which is popular among people coming from outside the region, and Jämtland's famous ski resorts, which sees Swedish tourists and seasonal workers descend on small towns such as Åre to hit its slopes and nightclubs in equal measure.

But the county also sticks out in that the figures have remained essentially unchanged in the past decade, unlike many other Swedish regions which have seen a rise – indicating, Wåhlén-Götzmann argues, that it manages to record most of the cases and does not suffer from a large proportion of hidden statistics.

“The number does go up every winter, but it's likely more among the seasonal workers than the tourists. We carry out a lot of tests and preventative work. And we do a lot of work in the mountain resorts to urge people to seek help and every time we do that it actually tends to generate an extra wave of reports,” she said.

Sweden has previously been singled out as the STD capital of Europe, with an increasing number of sexually active Swedes contracting chlamydia and gonorrhea every year.

Under Swedish law, anyone with chlamydia is supposed to contact all previous sexual partners to warn them about the infection, which has few visible symptoms and often spreads without people knowing they have it.

It can usually be tackled with antibiotics but if left untreated it can lead to major health problems including swollen genitals and infertility.