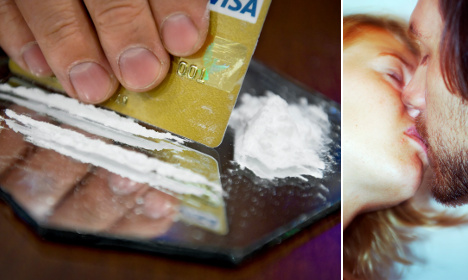 The people pictured are not related to the story. Photo: Claudio Bresciani/Sandra Qvist/TT

Officers arresting the 16-year-old described her as having “glossy eyes, slurred speech and unsteady walk” when they stopped her in the southern Swedish city on a night out.

So, many Swedes were in shock when news emerged over the weekend that an appeals court had freed her on Friday from any wrongdoing – after she claimed she had inadvertently consumed the cocaine after snogging her boyfriend.

Southern Sweden's regional Sydsvenskan newspaper reported that she had told police that the boyfriend had “tasted bitter” and that the make-out session had left her lips numb.

“I have never in my life taken drugs, I hate drugs,” she was quoted as saying in interrogations.

Malmö district court first ordered 20 hours of community service after finding her version of events “so implausible that it can be dismissed”. But the appeals court insisted it could not be ruled out.

“Her story seems strange, but is not so strange that we can completely disregard it,” the appeals judge, Bengt Sagnert, told Sydsvenskan.

He added that the prosecutor had in this case failed to prove beyond reasonable doubt that the teenager's story was impossible, but said the ruling did not give carte blanche to future offenders.

“No, this opens no opportunity for others to get away,” he said.

The story has divided Sweden into two camps, with some finding it amusing and others being outraged.

One sceptic wrote on news site Nyheter24's Facebook page: “Well, then probably if you have holes in your teeth then that too will be contagious if you make out with someone.”

But another wrote on Sydsvenskan's Facebook page: “Could imagine that quite a few are folded over in laughter over the Swedish legal system right now… the rest of us are ashamed and only feel frustrated, angry and hopeless.”

However, the French kiss defence has in fact been used in court before. French tennis champion Richard Gasquet famously escaped a lengthy doping ban back in 2009 when he convinced a court he had accidentally ingested cocaine by kissing a woman in a nightclub.

Sweden criminalized illicit drug use in 1988, thanks in large part to a two-decade campaign by a group called the Swedish National Association for a Drug-free Society (RNS).

According to a survey by Sweden's Public Health Agency (Folkhälsomyndigheten), a total of 3.8 percent of men and 2.5 percent of women have used cocaine at some point in their life.