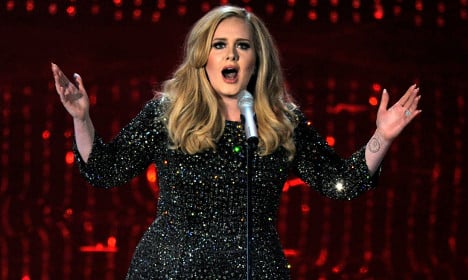 This is the real Adele. Photo: Chris Pizzello/Invision/AP

My Kullsvik from Tidaholm, a small town in central Sweden, told The Local she was happy to see her video being shared online, receiving more than 8,000 likes on YouTube.

“The reactions have been super positive. I have received so many kind words from people who have no clue who I am,” she said.

Her beautiful rendition of the massive hit is the latest in a line of numerous Adele covers, including an 11-year-old boy's breathtaking version which went viral only last week.

“I have heard so many covers and also parodies of this song so I wanted to do something different and serious, and then things happened pretty quickly,” said Kullsvik.

Earlier in the day, she told Swedish social media site Omtalat, which first wrote about the story, that she has always loved music but has never before dared showcase her material.

But her Adele cover has been an instant success with people viewing the video on YouTube or Instagram.

“Terribly good. You sing beautifully and above all genuinely,” wrote one.

“Your version felt even more emotional than Adele's, really really nice,” said another.

The Swede herself is humble about her viral fame. When The Local, and indeed many commenting on the video, suggests a duet with the star behind the original she laughs.

“My dream is only to reach out to as many as possible and show what I love doing. Haha, Adele probably has other things to do than sing with me, but it's a dream.”

'Hello' is the first single from Adele's most recent record '25, which has sold more than 15 million copies worldwide since it was released in November last year.