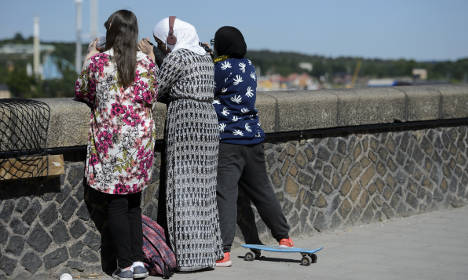 Young women with foreign backgrounds in Stockholm in 2015. Photo: Henrik Montgomery/TT
Since the start of the year, Sweden has witnessed a storm of reports about sexual offences and other crimes against women and girls by men who are assumed by the media to be from the migrant community.
This followed the events in Cologne on New Year's eve and claims of a police cover-up at a Stockholm music festival which emerged shortly afterwards.
The media has reported on a near daily basis about crimes against women and girls in the streets and in public baths, both in Sweden and elsewhere in Europe.
But when analysing these events, we need to begin by sorting out some statistical pitfalls. It would be refreshing for those engaged in this debate to observe the statistics, thus avoiding prejudice and stereotyping.
According to the latest Swedish National Crime Survey (NTU) from 2015, conducted by the National Crime Prevention Council (Brå), the percentage of reported crimes against individuals decreased in Sweden compared with the previous year. The most common types of crime were threats and harassment, and the least common were sexual crimes, muggings, and severe beatings.
It is therefore of utmost importance to note the difference between the perceived danger of the crime and the actual risk.
According to work by the Dutch researcher Gwen van Eijk, the perceived fear of crime is substantially shaped by traditional norms about being male or female in a society.
Those who experience a greater fear of crime are usually the ones that are the least exposed to such crime, whereas the group most prone to experience crime (young males age 20-24 years) feel the least concern.
This is an interesting paradox, where young men in statistical terms should be afraid of being exposed to violence in public places and as a consequence adjust their behaviour patterns by restricting their freedom of movement. Instead, it is this category of individuals who are raised to believe they must protect women and girls from violence and crime when they are in fact for the most part themselves both victims and perpetrators.
Although the risk is statistically low, the message conveyed to women and girls continues to be characterised by a narrative that they should protect themselves and be afraid of violence from men.
This fear is reflected in many women's behaviour in the evenings where specific locations, such as dark parks or deserted streets, are avoided by them.
Despite the statistical discrepancies, boys and men are raised to a greater extent to not feel afraid of physical violence against themselves, but rather to act as a protectors. The We are Sthlm festival, where there were sex crime allegations. Photo: Alexander Tillheden/We are Sthlm
Van Eijk raises another aspect in this paradox: that men and women with a foreign background more often experience fear of violence in public spaces and thus restrict their freedom of movement to a greater extent.
It is worth noting that it is more common among people with two foreign-born parents to be victims of a sexual offence. Sexual offences are also among the least reported crimes to the police (only 8 percent in 2014). In other words, based on the statistical evidence we can assume that you are at greater risk of being subjected to sexual violence if you are a woman with foreign-born parents – a fact which has been absent in the public debate in Sweden during the past few weeks.
The Swedish National Crime Survey 2015 reported that the risk of being exposed to sexual violence in Sweden is 1.0 percent. This is a decrease compared to 2013, when 1.3 percent said they had been subjected to this kind of crime.
Slightly over half of people who reported sexual offences (53 per cent) said these occurred in a public place, and in 63 percent of the cases the perpetrator was completely unknown to the victim.
Vulnerability to sexual crimes is much more common among women than men and most common in those aged under 24.
Researcher Laura Sjoberg writes in her book 'Gender, War and Conflict' about how gender roles can be used in the justification of violence against a common 'enemy'.
One way this could be applied to the current debate is to look at how men and women in Sweden and in other parts of Europe have participated in the reaction to the recent sexual offences that are alleged to have occurred against women and girls in public spaces, such as at the festival 'We are Stockholm'.
In parts of Europe, groups characterised by hyper-masculine identities, such as football hooligans in Cologne and right-wing extremists in Finland, responded by patrolling the streets to protect women's security from perceived threats from outside their respective countries. This was shown not to be a successful strategy, to say the least.

Right-wing campaigners in Germany. Photo: Juergen Schwarz/TT
In social media, we can see how articles are being shared by members of these groups with the message “enough is enough” and references to the nationalist Sweden Democrat party’s goal to get people deported from Sweden if they commit sexual offences.
But let us return to the National Security Survey from 2015 and look specifically at sexual offences in Sweden.
Violence against women in the public sphere has been more or less constant in recent years. It seems as if the debate today depends more on who is assumed to be the perpetrator.
We can use the Bråvalla Festival 2014 and 2015 as examples, where several rapes or attempted rapes were reported. The reactions that followed were mostly from groups and organisations with a
specific focus to strengthen women's rights and reduce violence against women in Sweden. There was no large group of men who raised their voices and demanded strengthened protection for women in public places or that the offenders should be punished. The hyper-masculine groups were absent and did not offer to patrol Swedish festivals.
In what way are these alleged crimes different from the sexual offences reported on in 2016?
It seems clear that opponents to migration are using traditional gender roles and kidnapping the gender equality agenda in order to gain ground in the much too one-sided debate about the refugee situation.
The groups that draw parallels between increasing immigration and the possible restriction of (note: Swedish) women's movement are generally not inclined to support women's rights, but rather make a rejection of feminism and current gender policy (see, for example, the Sweden Democrats gender policy, which focuses on allowing women to play a more 'traditional' role in child rearing).
It has been noted that the gender balance among asylum seekers in Sweden is skewed, with approximately two thirds being male.
It is important for the Swedish government to note this gender imbalance among the asylum seekers and adapt integration measures accordingly, but it should not let individual cases of sex crimes form the basis for a simplified approach to the asylum-seeking man.
The Swedish government decided on January 26th 2016 to set up an investigation into identify and establishing legal routes for asylum seekers to the EU. This is warmly welcomed, as today’s hazardous routes specifically restrict women's and girls' opportunities to safely seek asylum.
It should have been part of the Swedish government's much publicised feminist foreign policy from the beginning, at a time when Europe is said to be facing the biggest migration crisis since World War Two.
Today’s narrative in the migration debate can be summarized by Swedish artist Silvana Imam: “tell your son to behave, tell your daughter to protect herself”. But the question is, from whom?
Martina Lindberg lectures on women, peace and security matters at the Swedish Defence University in Stockholm.  A version of article was originally published in Swedish by Swedish security magazine Mänsklig Säkerhet.