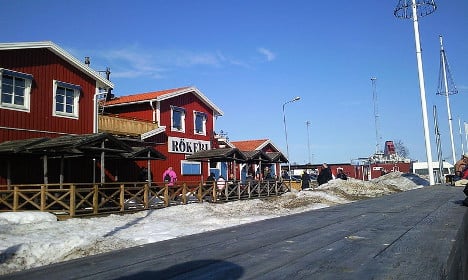 Nynäshamn south of Stockholm, where the arrests took place. Photo: Wikicommons/Pewee
Officers rounded up 14 people on Monday night in cars close to the asylum accommodation that is thought to have been the intended target of the plot.
Batons, knives, iron bars and axes were found in the suspects' vehicles.
Hesam Akbari, a spokesperson for Stockholm police, told the TT news agency that members of the group were facing a number of charges.
“The (police) report now concerns three offences. Preparation for aggravated assault, incitement to aggravated assault and incitement to aggravated arson,” he said.
Police added that all of those arrested were set to be questioned on Tuesday.
“They are Polish citizens and they belong to the far-right sphere,” police spokesman Lars Alvarsjö told public broadcaster Swedish Radio.
The editor of Swedish anti-racism magazine Expo, Mikael Färnbo, told TT that they have previously observed close links between far-right communities in Sweden and Eastern Europe.
“In general terms alone we can say that we know that there are connections,” he said.
The Aftonbladet daily reported that some of the suspects were living and working in Sweden.
Last month, dozens of masked men believed to belong to hooligan or neo-Nazi gangs gathered in central Stockholm and distributed leaflets calling for attacks on young migrants.
Three of the 14 men arrested on Monday evening were involved in the January incident, Alvarsjö told AFP.
Nynäshamn, some 60km south of the Swedish capital is a picturesque coastal town that is frequently used as a gateway to Stockholm's archipelago.
Swedish officials recently have called for stepped-up security at asylum accommodation across the country after an employee at a centre for unaccompanied child refugees was fatally stabbed in January.
However news of the alleged plot emerged as police appeared to make efforts to calm far-right sentiment in the country by releasing statistics which suggest that less than one percent of crimes in Sweden are linked to refugees.
Sweden took in a record 163,000 asylum seekers in 2015 and expects to receive around 100,000 more this year, despite tightening its borders.
Url copied to clipboard!