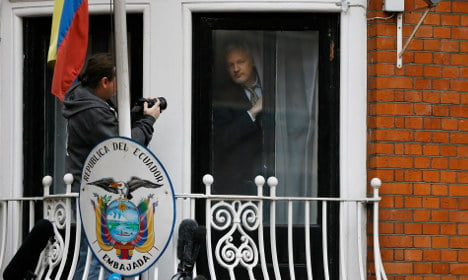 “Concerning the report that was issued last week, I would like to state that it does not change my earlier assessments in the investigation,” Marianne Ny said in a statement on Tuesday.

Assange, who faces a rape allegation in Sweden, urged Britain and Sweden to let him walk free from Ecuador's London embassy after a UN panel found on Friday he had been “arbitrarily detained”.

The 44-year-old Australian, who has been in the embassy for approaching four years, has refused to go to Sweden, fearing deportation to the United States over Wikileaks' release of 500,000 secret military files.

UN's Working Group on Arbitrary Detention, an independent panel of experts, ruled in a statement on Friday that the Australian former hacker had been “arbitrarily detained by the governments of Sweden and the United Kingdom”.

The panel demanded in its statement that Assange's detention “should be brought to an end, that his physical integrity and freedom of movement be respected, and that he should be entitled to an enforceable right to compensation.”

However, commenting for the first time on the panel's ruling, Ny said she was “currently working on a renewed request to interview Julian Assange at Ecuador's embassy in London”.

It remained unclear on Tuesday whether or not either Assange or Ecuador would accept the request.

“I cannot answer today. We have to assess this on the basis of the new circumstances that have arisen after the UN panel's report. We're planning a meeting with Julian Assange in the near future,” one of his Swedish lawyers, Thomas Olsson, told the TT newswire.

Sweden reached a judicial agreement with Ecuador in December which paved the way for Swedish prosecutors to interrogate him. But the latter rejected the most recent request in January on a technicality.

And Baltasar Garzón, international coordinator for the Wikileaks founder's legal team, told reporters at a press conference on Friday that “no legal action” could be taken in the face of an “arbitrary” deprivation of liberty.

Both Sweden and the UK have rejected the UN panel's ruling. Britain maintains that it has an obligation to arrest Assange as long as a European warrant for his arrest remains in force.

Meanwhile, Sweden's foreign ministry sent a letter to the panel formally disagreeing with its decision.

“Mr Assange is free to leave the embassy at any point and Swedish authorities have no control over his decision to stay at the embassy,” it said in a statement.

Mark Klamberg, an associate law professor at Stockholm University, told The Local last week that although he personally disagreed with the panel's opinion, as Assange had voluntarily taken refuge in the embassy, it was “tricky” for Sweden, as the country would usually aim to comply with UN panels.

“The opinion in itself is not binding, however it has made its opinion based on certain international treaties, and those treaties are binding,” he said. “Is it irrelevant? I wouldn’t say so.”