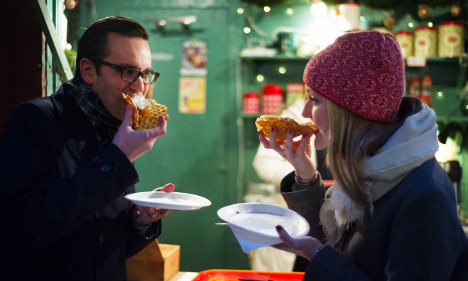 Could your Swedish romance start like this? Photo: Ulf Lundin/Image Bank Sweden
1. A blossoming romance
A flower bed in southern Sweden blossomed into the words “marry me” last summer after Danish entrepreneur Kenneth Neergaard, 30, went to amazing lengths to propose to his future wife. “She had a tear in her eye and then she was speechless for a bit,”  he told The Local, as news of his unique approach went viral. Aww. Click here to read more and see photos of his gardening efforts. The flower bed (far left) and the happy couple. Photo: Private
2. A tale that beggars belief
Josefin Karlsson, 37,  was so disgusted by the abuse hurled at the young beggar sitting outside her local supermarket in Gothenburg that she resolved to talk to him. The chats went rather better than expected, because in December they got married.
“I had lent Florin my cell phone so he could call home and talk to his family. And suddenly, one night, he called me to tell me he had feelings for me and wanted us to be together (…) deep down, I felt exactly the same as he did,” she told The Local. The happy couple. Photo: Private
3. The real fairytale ending
In June, a tattooed former glamour model and reality TV star tied the knot with a Swedish prince. Sofia Hellqvist and Prince Carl Philip first met in a nightclub in Stockholm back in 2009. They enjoyed a lavish wedding in the Swedish capital complete with a horse and cart and a banquet including lobster and peach and raspberry tartelette. The pair are expecting their first baby in April.

The royals pictured in January. Photo: Fredrik Sandberg/TT
4. Grease is the word (and 'yes')
A Swedish children's TV presenter left his girlfriend speechless in November when he asked her to marry him by organizing an electrifying flashmob to the tune of a famous Grease hit. Alex Hermansson first met his future bride in church in 2014 and told The Local he had spent two months planning his proposal.
“I spent the whole period being pretty tired and then afterwards the pressure sort of relaxed and I hit my personal best in being exhausted and happy at the same time,” he said.
5. Tinder reconnects “destiny” preschoolers
Amanda Bidar Pino and Ali Hassan met on dating app Tinder in 2014. They had no friends in common and thought they had never met before, but it turned out they had been in the same class at preschool.
“This made us realize that we were meant for each other. Now I really believe in destiny,” Bidar Pino said, when the news emerged last October. The couple then (left) and now (right) Photo: Amanda Bidar Pino
6. Mamma Mia! Here we go again
Legendary Swedish band Abba used to be made up of two couples, Agnetha Fältskog and Björn Ulvaeus and Benny Andersson and Anni-Frid Lyngstad. But both pairs divorced, the group split up and the gang was never snapped as a foursome in public together again. That is until this January when Ulvaeus rallied the troops for the opening of his new Mamma Mia-inspired restaurant and cabaret venue in Stockholm. It seems the former partners have finally kissed and made up.
Love takes many forms and friendship is one of them. So, if you're single this Valentine's Day, grab a mate instead and tell them how much they rock.