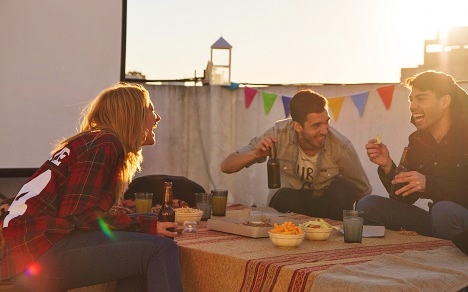 1. The toilet paper will always run out It doesn’t matter if you live with two people or ten – at some point you will be left sitting on the toilet shouting through the door, hoping that there is a roll hidden somewhere in a closet halfway to Narnia.

For many flatsharers, group shopping becomes a way of life, and a rotating schedule of shopping duties can be the key to de-stressing your roomie interactions (and bathroom visits).

As one flatsharer from London told us, group shopping becomes the standard “not just for rent itself, but for core groceries, cleaning products, taxis home, and Netflix subscriptions”. Hey, sharing is caring! Speaking of rotating duties, cleaning may be one of those.

“We had a schedule for weekly cleaning and rubbish emptying duties, and if you got behind on the cleaning schedule you’d be reprimanded,” one British woman recalled of her flatsharing days in Austria.

“And Brits have a reputation for being useless at cleaning – according to Austrians!”

But sharing cleaning responsibilities with a group of foreigners can lead to some pretty messy faux pas as well. One young woman who shared a flat with French and Italian students in Rome learned that the hard way.

Find your flatshare on Weroom

“In Italian the word 'scopare' means 'to sweep' – but it is also a slang term for having sex, which led to confusion when we were arranging household chores!” Just like Goldilocks discovered, hot, cold, and “just right” are very relative terms. Don’t be surprised if a temperature tussle breaks out.

“At university in the UK I shared a flat with a Polish guy, a girl from Greece, and another from Serbia,” a Swedish woman told The Local.

“We could never agree on how warm the flat should be. The two southern Europeans would turn the radiator up as high as possible and walk around in tank tops and hotpants; the Polish guy and I would turn it back down again and wrap up in woollen sweaters. We kept going like this for two years.”

4.  Some people put milk in before the cereal Different strokes for different folks. You’ll find that your new international roomies do things in unexpected or even shocking ways.

“I couldn’t believe my eyes when my Swedish roomie poured milk into her bowl and then plopped down the cereal on top of it,” an American girl recalled. “And they love putting ketchup on pasta, too!”

Find your flatshare on Weroom

And that doesn’t just apply to food. Cohabitating culture clashes mean you might wake up to a strange man sleeping on your living room couch one day.

“We tried to always text each other in advance if we were going to have a friend sleep over – but sometimes we forgot. So you might brew your coffee and turn around and see a random Czech guy in your house!” But there are plenty of perks that come with different tastes. On those days when you would just order take out, chances are at least one of your roomies is cooking something. And it’s a whole new world of culinary experiences.

“I thought I knew how to cook crepes and pasta, but apparently I was doing both wrong,” a young British woman laughed.

“You get exposed to so many new things,” another woman agreed. “Different music, film and food tastes.”

Expand your tastebuds with a Weroom flatshare

But keep in mind that not everyone likes your favourite delicacies from back home.

“I was staying with some Chileans and kindly offered them some of my special marmite jar,” another British reader recalled. “A girl in the family ran crying from the room as she thought I was being really horrible and deliberately giving her something truly nasty and poisonous!”

6. Somebody has to be brave enough to smack the spider Compromise is an essential part of any long-term relationship – flatmates included.

“We were three girls in one flat and we were all terrified of spiders,” an American flatsharer recalled. “So when we found a massive one in the shower, we would all start screaming and no one would do anything. That had to change!”

The same rule applies to everything from new roomies to toilet seats.

“In our flatshare, any new housemate had to be interviewed and be approved by anyone,” one reader pitched in. “And there was a house rule that guys had to sit down to pee!” “When I first shared a flat in Spain, I learnt how important it was to share with similar people,” one reader told us.

If you are working and have to be up early, it's best not to share with students who have a completely different daily routine to you, she explained.

8. You will make unexpected, lifelong friendships The most important thing, however, is to approach a flatshare with an open mind – you’ll be surprised who becomes your new best friend.

“There are so many people that you would never have thought to socialize with, who can actually become great flatmates and great friends,” a Swedish man commented.

“In London I was in a flatshare with a guy Australian nurse who worked at night and was seven years older than me. I wasn't really sure of him or the flat – but he ended up being the best flatmate I ever had.”

And it’s not just your flatmates – you’ll have their wider network passing through and meet all the friends of your new friends.

Plus, there’s nothing like fantastic flatmates to help you relax after a bad day.

“Having flatmates to chat to can stop you stewing or stressing all night, by telling you a joke or distracting you with their own problems,” said a British flatsharer.

This article was produced by The Local and sponsored by Weroom flatsharing service. Find your new flatshare here.