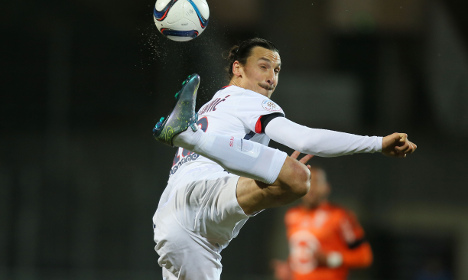 This is Zlatan. Be like Zlatan. Photo: AP Photo/David Vincent

Fans are getting excited for the release of the movie 'Den unge Zlatan' (English title: 'Becoming Zlatan'), which is set to hit theatres in Sweden on Wednesday. The documentary by Swedish filmmakers Magnus and Fredrik Gertten features previously unseen interviews and footage of the young stars in his early days.

But while the film only charts the footballer's road from Malmö FF to stardom after he was sold to Ajax for more than 80 million kronor (€8.7 million) in 2001, The Local offers some more hands-on advice for those of you hoping to actually become him, like the English title suggests.

Here are five things you need to be more like Zlatan Ibrahimovic.

1. Get an ego the size of a football pitch

Scandinavian humility and penchant for everything 'lagom' clearly never rubbed off on Ibrahimovic. He has likened himself to God, fine wine, a Ferrari and a great white shark. When Sweden failed to make the World Cup 2014 he ruled that “a World Cup without me is nothing to watch”. Two years earlier when Sweden got kicked out from the Euro 2012: “I don't give a shit who wins it now. I'm going on holiday.”

When Zlatan goes swimming, he doesn't get wet, the water gets Zlataned.

2. Refer to yourself in third person

The Swedish striker is known for talking about himself in third person. “Zlatan doesn't do auditions,” he told Arsenal manager Arsene Wenger when the latter wanted him to come and play during a trial period. “An injured Zlatan is a serious matter for any team,” he remarked on another occasion. And on answering what he got his wife for her birthday he famously replied: “Nothing, she already has Zlatan.” 3. Be a registered trademark

In 2003 the Swedish Patent And Registration Office (Patent- och registreringsverket) banned other people and businesses from using the name 'Zlatan' for their own products because it was “likely to be perceived as another person's artist name, i.e. Zlatan Ibrahimovic”. The striker has since himself put his name to a series of products, including perfumes and commercials. Ferrari Enzo, Porsche 911 Turbo, Mercedes SL 55, Porsche 918, Maserati GranTurismo… these are just some of the cars Ibrahimovic has sat behind the wheel of. When he bought his now-sold house in Malmö he had to build a huge underground garage for all his cars. His latest beast was a 963 horsepower yellow Ferrari Laferrari with a prize tag of 1.3 million euros. He paid in cash. Obviously. 5. Seriously up your football skills

We mentioned Ibrahimovic's ego above, but he has good reason for being proud of his football prowess. He is Sweden's top striker of all time and also became the all-time leading goalscorer for his club side Paris Saint-Germain last year. In November he won his record 10th Golden Ball award – 'Guldbollen', Sweden's own national football prize. And who doesn't remember his spectacular bicycle kick against England in 2013, which won him the 2013 Fifa Puskás Award for Goal of the Year? You try doing that at home.