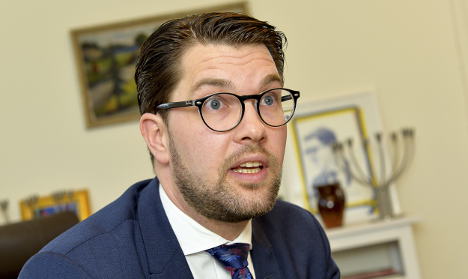 The leader of Sweden's anti-immigration party Jimmie Åkesson was hoping to get people talking about his debate article in one of Sweden's biggest newspapers on Monday, calling for a common border for the Nordic region.

But he ended up causing a stir on social media for all the wrong reasons after a reader suggested that he and his co-writer, senior Sweden Democrat Aron Emilsson, needed a basic history lesson.

“Our 26 million inhabitants make up a small part of Europe's and the world's population but together we have achieved strong, stable economies, 200 years of peace, strong innovation and a Nordic welfare model which has a strong reputation all over the world,” the political pair wrote in Swedish daily Dagens Nyheter.

Sweden has avoided conflict for two centuries, after staying neutral during World War Two. However Norway, Finland and Denmark all participated in the war which remains one of the biggest bloodsheds in history. Norway and Denmark were both invaded and occupied by the Nazis while Finland fought both against Germany and Russia.

“Really, Åkesson? What was WW2 about? Anschluss?” wrote regional centre-left Green Party politician Nils Karlsson on Twitter after the blunder.

A spokesperson for the Sweden Democrats, Henrik Vinge, told The Local that the factually incorrect text had since been amended online.

Meanwhile the editor of Dagens Nyheter, Nils Öhman, has admitted that his team should also have been more beady-eyed when publishing the content.

“It was a reader who came forward and pointed it out. We should have seen it too,” he told Swedish tabloid Expressen.

The nationalist Sweden Democrats want to drastically cut immigration to Sweden and Åkesson and Emilsson suggested in their article that this could be achieved by a more unified cooperation between Sweden's neighbours.

Recent opinion polls suggest the Sweden Democrat party has the support of around 20 percent of the electorate.

The group's error in Dagens Nyheter came just days after Sweden's Social Democrat Prime Minister Stefan Löfven was involved in another mix-up, telling a conference in Mumbai on Saturday that “the eyes of the world are on China”, before quickly correcting himself and saying “sorry, on India”.