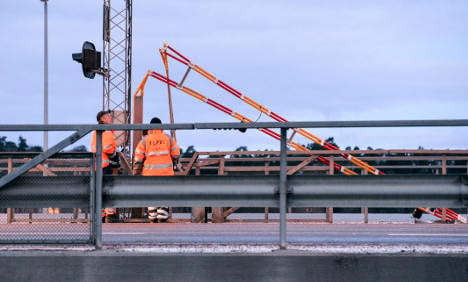 Emergency services photographed on the bridge over the weekend. Photo: Johan Nilsson/TT

An investigation is under way into the accident in Södertälje, south of Stockholm, that left all four musicians in the British indie band dead, as well as their manager Craig Tarry.

Viola Beach members Kris Leonard, Tomas Lowe, Jack Dakin and River Reeves were killed in the early hours of Saturday morning when their car plunged into a canal from a gap in a bridge that had opened in order to let a boat pass through.

They were on their way to Stockholm's Arlanda airport having played their first gig outside the UK in Norrköping on Friday, at the small city's Where's the Music festival.

Police told The Local on Monday that their immediate focus was speaking to witnesses and examining the car and the barrier on the bridge to try to work out the cause of the crash. The car's wreckage photographed over the weekend. Photo: Johan Nilsson/TT

A press spokesperson for the Stockholm region, Carina Skagerlind, said that officers would also consider a range of possible offences including suspected manslaughter and reckless driving as part of their investigation. She said that drunk driving could also feature in their inquiry but explained that autopsies on the band and their manager needed to be carried out first.

“Right now we are looking at the car and the conditions on the road and we are talking to witnesses.”

“We have to look if everything is alright with the brakes and so on, why didn't they stop and what kind of wheels it had.”

Sweden has one of the best road safety records in the world. The law requires all drivers to use special winter tyres during icy or snowy weather, but Skagerlind would not be drawn on whether the band's hire car had been fitted with these.

“It's now an investigation and we have to get the full picture of everything before we can talk on details,” she said.

Police have not suggested who was driving the Nissan Qashqai hire car at the time of the accident.

John Hugo Olsson, 22, from the Swedish band Psykofant, who shared a dressing room with the band in Norrköping told The Local that he had been instantly won over by the musicians, who were from Warrington in northern England, and even compared them to the Beatles.

“They were fantastic, you immediately fell in love with them the moment they came through the door,” he said. “They had these extremely charming Manchester accents. It was like a scene from A Hard Day's Night. They just fell into the room.”

Phil Taggart, a DJ with Britain's BBC Radio 1 music station tweeted that the band had been “on the cusp of something great”.

Band member Tomas Lowe's family released a statement via the British Foreign Office, describing him as “the best son, brother, uncle and friend you could ever wish for”.

“Tomas had a passion for music and for life and he was, in his words, 'living the dream' when his life was tragically cut short. He will be missed by all who knew and loved him,” it added.

River Reeves's family said they were “heartbroken”, while a friend of manager Craig Tarry told British media that he was “much loved by all of us, and all those that ever came in contact with him”.

The proceeds of the band's latest single will go to their families, Viola Beach's record label Communion said on Sunday.