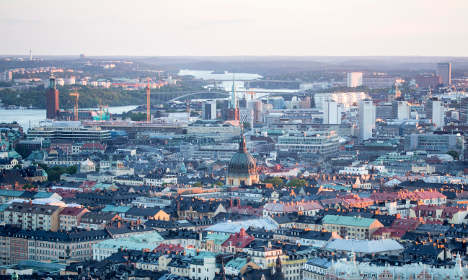 Stockholm has the third most potential in the Nordics, according to a key ranking. Photo: Christine Olsson/TT

Copenhagen and Stockholm have long had a friendly rivalry over which city can rightfully lay claim to the title of the 'Capital of Scandinavia', but a new report from the Nordic Centre for Spatial Development (Nordregio) says they are both wrong. The true capital is Oslo.

For the first time ever, Nordregio's report included a Regional Potential Index that compared the performance of 74 administrative regions in the Nordic countries. Taking into consideration the regions' key economic, demographic and employement indicators, the report concluded that the Oslo region was the top performer.

Following behind was Denmark's Copenhagen capital region. The only other Swedish city to make it into the top-10 was university town Uppsala, which claimed ninth place in the rankings.

However, Swedish regions of Jönköping and Jämtland, as well as Norway's Troms, Nord-Trøndelag and Finnmark were the most improved regions in the Nordics, while Denmark's Zealand took the biggest tumble.

Nordregio spokesman Julien Grunfelder said that all three of the report's top performers are clearly on the upswing.

“Oslo, Copenhagen and Stockholm are now among the richest regions in Europe. The growth is driven by, among other things, rapid population increases. In 20 years, we have grown by 2.7 million more people to a total of 26.5 million and 97 percent of the increase has occurred in the 30 largest metropolitan areas,” Grunfelder told The Local.

The Nordregio report found that the populations of Sweden and Finland increased in urban areas and further decreasing in the countries' already less populated areas, while all regions in Denmark, Norway and Iceland had an overall increase between 2000 and 2013.

Stockholm grew by 28.4 percent and is still the largest in the Nordics with 2.21 million inhabitants, followed closely by Copenhagen. The Danish capital region had a 2015 population of 2.13 million, a 13.7 percent growth over 1995 figures.

The fastest growing of all Nordic urban areas was Stavanger, which saw its population shoot up by 36.8 percent and is now home to 290,000 people.

Nordregio’s entire State of the Nordic Region 2016 report can be read here.