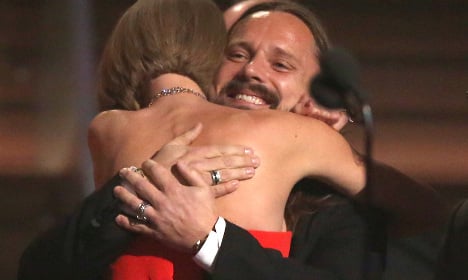 Stockholm-based producer Max Martin was on the team that won the award in the prestigious 'Album of the Year' category for their work on US pop country star Taylor Swift's acclaimed '1989', together with Ali Payami, Johan Schuster, Mattias Larsson, Mattias Bylund and Robin Fredriksson.

It was not a unique experience for the Swedish hit maker, who took home a Grammy at last year's gala too, and was announced as the winner of Sweden's own huge Polar Music Prize last week.

He is one of the world's most successful producers, boasting a resume that includes creating massive hits for artists including Britney Spears, Justin Bieber and Kate Perry.

Sweden's top music export since Abba has written or co-written 21 hits that have made number one on US singles chart Billboard since 1999, bested only by Beatles legends Paul McCartney and John Lennon.

READ ALSO: Bigger than Abba, but who is Max Martin?

However, it was another group of Swedes who really became the talk of the red carpet at the show on Monday after they presented a rather different interpretation of the gala dress code to the rest of the guests. 'Ghost', a metal band from Linköping in southern Sweden, were awarded the prize for 'Best Metal Performance'. Their identities a secret – they use the aliases 'Papa Emeritus III and his Nameless Ghouls' – they accepted their prize dressed in full costume, including masks, painted faces and black outfits.

“Hello, we're Ghost,” they said as they took to the stage. “Thank you so much for this. This is a big, big thing for us, obviously. And, you know, nightmare has just turned into a dream, so thank you all for that. Thank you, everybody involved, and thank you for voting. Now: go party!”

A bunch of other Swedes, including Max Martin (again), pop artist Tove Lo, dance duo Galantis and conductor Peter Dijkstra, had been nominated in several categories but narrowly missed out on wins.