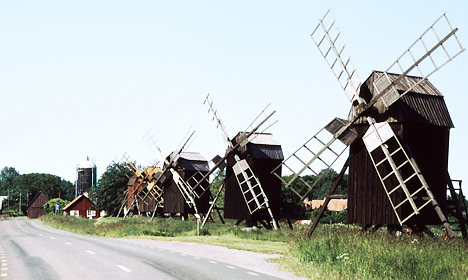 When politicians in Mörbylånga municipality on the island off Sweden's east coast convened on Tuesday evening the lack of rain was on everyone's lips.

With groundwater levels exceptionally low islanders are worried about the impact of the drought on Öland’s two biggest industries, livestock farming and tourism.

But none of this put a dampener on the spirits of one enthusiastic Green Party politician. When Eva Öberg stood up in front of the assembly to say her piece she called on all those gathered to perform a rain dance.

If her fellow politicians had any doubts they didn’t show it. Soon the hall was a sea of swaying arms and clapping hands.

In a picture snapped by local newspaper Ölandsbladet only a few bemused-looking officials remained seated as all around them the Mörbylånga rainmakers gyrated.

For most of the politicians the dance was a novelty. That was not the case for Öberg.

“I dance rain dances in private now and then, but this was the first time we did one at a council meeting,” she told The Local.

The rain dance lasted “around five minutes”, she said.

“I got up and took part in the twisting. We'd been sitting down for a long time and it was a good time to stand up and move around a bit.”

Öberg said she had received only positive feedback from her colleagues who had laughed and applauded throughout. Asked whether she really believed in the power of rainmaking, Öberg said:

But does she have any evidence that it works?

Öberg added: “But people have been performing rain dances for a long time in countries that are a lot drier than ours.”

“Dry and sunny,” she said with a laugh.