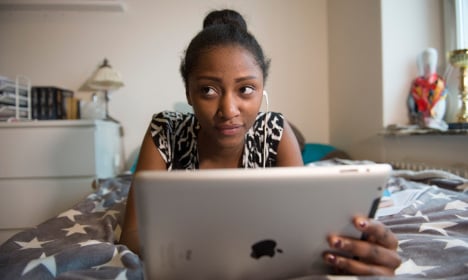 Swedes are some of the world's keenest internet users. Photo: Maja Suslin/TT

People were asked to perform tasks on deadline, during the study, which required them to watch a badly buffered video download. Subjects experienced an average heart rate jump of 38 percent.

If this buffering delay lasted six seconds, “the stress response to delays was similar to that of watching a horror movie or solving a mathematical problem and greater than waiting in a check-out line at the grocery store”, Ericsson said in its quarterly report on trends in the mobile internet.

The test was conducted in Denmark, which boasts some of the world's fastest mobile internet speeds, along with Sweden. The average mobile broadband speed in Sweden is 59 megabit per second, according to the Bredbandskollen website, compared to 73 megabit in Stockholm.

Over the last 12 months global mobile data traffic, which includes streaming, increased by 65 percent, according to Ericsson.

“Offering customers good network performance when it is needed is a key to improving brand equity,” for mobile companies, Ericsson concluded.

Swedes are some of the most tech-loving people in Europe, and spend on average 21 hours a week online, and eight hours checking the internet on their mobile phone, according to a 2015 nationwide study.

But the latter could be a thing of the past in any case, if other prophecies by Ericsson come true. Last year it predicted that the smartphone will die out in five years, with artificial intelligence taking over.