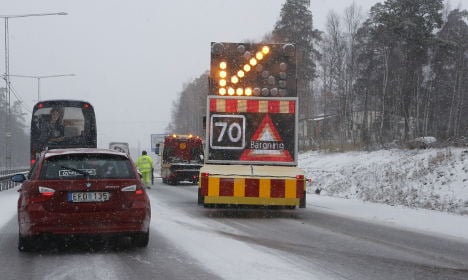 Several centimetres of snow fell in less than a few hours in south-eastern parts of Sweden and the Stockholm region in the early morning, causing a spate of accidents on roads and motorways during rush hour.

Sweden has one of the best road safety records in the world and the law requires all drivers to use winter tyres during icy or snowy weather.

But on Thursday, a series of accidents nonetheless sparked long delays for commuters on the busy E18 road near Västerås with some drivers stuck in queues for more than an hour, reported the daily newspaper.

Good morning! This is what it looks like in Stockholm today. Just when I thought spring was on its way. pic.twitter.com/dTFM9hum9P

On the E20 near Södertälje, a car turned on to its roof just before 7.30am. The driver's condition still remained unclear by 10.30am.

“The roads are tricky right now. We've had quite a few vehicles going off the road. It is still difficult to get people to adjust their speed,” said Agnevik.

“So far nobody has been seriously injured,” he added.

The heavy snowfall was expected to move north later on Thursday, and harsh winds were predicted at sea off Sweden's east coast, according to national weather institute SMHI.

Sweden has so far enjoyed a relatively mild winter, with one Nordic snow car race almost being cancelled earlier this month due to a lack of the white stuff.