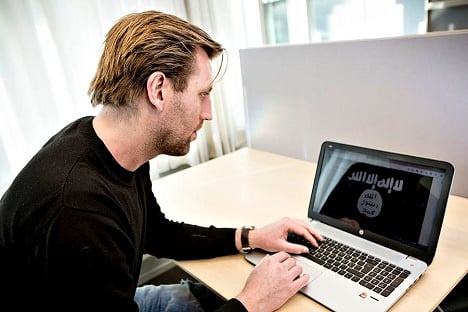 Malmö University’s Michael Krona is on the cutting-edge of research into the world of Isis propaganda. He reveals how genuinely impressive the terrorist organization’s media-wing is, and the surprises he has discovered along the way.

As a senior lecturer, Krona believes the university’s communication programme offers a unique approach that prepares graduates for this fast-paced, evolving field – a field where his finger is firmly on the pulse.

Having previously researched communication during the Arab Spring uprisings, Krona has more recently begun to analyse media activism and what can be achieved with technology – his specialist field within the English-language master’s programmes at Malmö University.

“I was surprised when studying activism as part of the communication field, because basically every contribution was very optimistic and romanticising about the role of technology, with people saying this can save the world,” he remarks.

“It was amazing that even scientists looked at technology as something that was a saviour. I started to look at it from a different perspective. And then Isis came into the middle of this, as one of the consequences of the failed Arab Spring revolutions.” Krona began researching the phenomenon from a more critical perspective – showing that the same technology praised by many can be used in a more sinister fashion.

Terrorist group Isis, for example, has become a champion of sorts on Twitter and Facebook, using platforms developed by major Western corporations to spread its anti-Western rhetoric.

“I found it interesting that Isis came about – at least in public opinion – in just one night. The first thing the mainstream media started talking about was its use of social media, the same technology so closely connected to the democratic reforms in the Arab Spring,” he muses.

It might be the graphic and brutal nature of the videos it produces which have been the focus of media attention, but Krona reveals the group has a far more nuanced approach, including high-quality output including magazines, radio productions, and podcasts.

“The video production itself is not very interesting, but in a wider context it is fascinating, and that differentiates them from any other organisation,” Krona explains.

“A lot of Westerners go through Turkey to Syria, people who worked in software technologies and film and television production.”

The professor confesses that he began his research with the thought that Isis was just about religious violence – but he has since realized things are more complicated.

“When you start looking at what they actually produce, it is so much more,” he says. “Violence is such a small percentage of the propaganda – it is about belonging, it is familiarity, it is happy children, it is paradise-like environments.”

So what does he think about Isis as an example of ‘best practices’ in media activism?

“It’s an unfortunate paradox,” he states. “I would argue that if you want to look at how to reach and target specific parts of your audience, look at Isis – they really are experts.” Krona has dealt with criticism of his research, and says he sometimes gets accused of contributing to extremist agendas by studying and replicating their material. While he views such critique as a valid discussion, he does not agree.

“There is always a risk in highlighting an organization like Isis, even in academic research,” he acknowledges. “However, I believe we need more detailed knowledge on this socially mediated terrorism in order to develop efficient countermeasures.”

It is within the scope of media and communication studies to analyze and attempt to understand even the darker side of the role of technology, he adds.

“Extremist organisations use the same technologies as we do in everyday life.”

Media activism is part of the focus in Malmö University’s programme, along with media strategy and entrepreneurial ideas in the new master’s degree.

“I think activism in general, both in terms of fieldwork and research, is very prominent right now; it’s much debated,” Krona says. “Our students are drawn to our approach, and I don’t know of any other master’s programme that has it.”

Normally master’s programmes in communication are very traditional and connected to social sciences, but the approach at Malmö University is more closely related to the practical field of media and communication.

“We aim to prepare our students for the changing face of communication,” he says. “We prepare them for a working environment where they have the possibility to change and adapt to specific structures – that’s our vision.”

This article was produced in parternship with and sponsored by Malmö University.