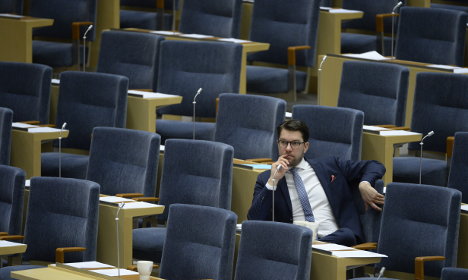 The party scored 20.9 percent in the latest poll by Inizio on behalf of Sweden's biggest newspaper, Aftonbladet, on Friday – down by 1.3 percentage points from its peak in its January survey.

It is now the third most popular choice among Swedish voters questioned for the poll, behind the ruling centre-left Social Democrats and the biggest centre-right opposition party, the Moderates.

“It's a fairly clear pattern, as both parties have lost many voters to the Sweden Democrats before. But it's flowing in the other direction now,” Inizio pollster Karin Nelsson told Aftonbladet.

Immigration has become an increasingly thorny issue in Sweden, after migration and housing authorities struggled to accommodate the record 163,000 people who sought asylum in 2015.

But numbers have since dropped, after a series of measures by the Social Democrat-Green coalition government, including ID checks on the border and stricter rules on who may be granted asylum. Around 100,000 asylum requests are expected to be filed in 2016, according to migration authorities.

“We see in our analysis that the refugee and immigration issue is growing in importance to the Swedes. The Social Democrats and the Moderates have changed their policies significantly and that is exactly what people have asked for,” explained Nelsson.

But despite topping the polls, with 24.5 percent of respondents saying they would vote for Prime Minister Stefan Löfven's party if an election were held today, the Social Democrats have not much cause to celebrate.

“It's still a very low level which I'm not satisfied with. We have to work harder to increase support. We can only do that by dealing with those challenges Sweden faces, the migration issue and so on,” its party secretary Carin Jämtin told Aftonbladet.

The Sweden Democrat party has been gaining in several polls in the past few months, although another key survey last month indicated their increasing support had come to a halt.

But its party secretary Richard Jomshof said he was not alarmed by the loss of momentum.

“It doesn't surprise me. These are still very high levels to us and what's important is the long-term trend and that we remain around 20 percent. That's where we hope to be ahead of the next election.”

The party scored 12.9 percent when Sweden last went to the polls in September 2014.

Elsewhere in Friday's poll, 22.4 percent said they would vote for the Moderates, which forms a right-wing Alliance with the smaller Centre party, Christian Democrats and Liberals.

Together they got the support of 40.1 percent of Inizio respondents, 4.5 percentage points more than the left-wing Social Democrats, Greens and Left party together – which means that if an election was held today they would likely claim back power in government.

The next general election in Sweden will be held in 2018.