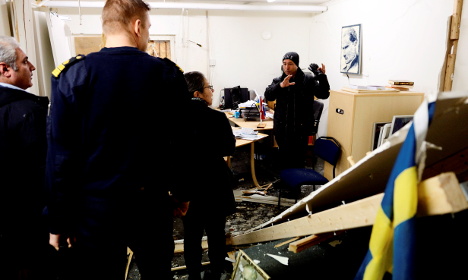 In the Stockholm suburb of Botkyrka, a powerful blast at a Turkish cultural centre destroyed two offices on Wednesday evening, leaving broken glass and blackened walls.

It came just four days after a man was shot at a pro-Kurdish rally in the same neighbourhood south-west of Stockholm.

“I have many young people who are worried now, they say 'maybe the Turks will come to my house and shoot me',” said Yilmas Zengin, a 55-year-old of Turkish and Kurdish origin who runs the nearby Botkyrka Youth Centre.

“We worry, more than anything, that the violence will increase,” he said outside the centre. Police at the scene of Saturday's shooting in Fittja. Photo: Johan Nilsson/TT

Botkyrka's Fittja neighbourhood is home to both Turks and Kurds where roughly 90 percent of the population is of foreign origin, and the incidents came as a surprise to both local communities.

Turkish ambassador Kaya Turkmen visited the scene of the blast and spoke to members of both the Kurdish and the Turkish communities. Several locals voiced fears that the blast was the result of a hand grenade, but police are still investigating.

“Turks and Kurds have been friends and lived in peace in Sweden and we can be grateful they decided not to be a part of this dirty game,” Turkmen told AFP as he surveyed the damage at the cultural centre.

“There are tensions in Turkey, so they are related. I hope there is no more violence,” said Turkmen, who also visited the Kurdish Cultural Centre, called the Anatoliska Kurdiska, some 100 metres away.

Wednesday night's explosion came on the same day that 28 people were killed in a bomb attack in the capital of Turkey, which – according to Ankara – has been targeted by Islamist and Kurdish groups since it started fighting them in neighbouring Syria. Mehmet Kayhan, who runs the Turkish cultural centre, said he feared Fittja was seeing conflict imported from the Middle East. He said there had been a fight between Turks and demonstrating Kurds in front of the centre just before the shooting on Saturday.

But according to Kayhan and other witnesses at the Turkish and the Kurdish cultural centres, the demonstrators were not from the Fittja neighbourhood.

“A crowd of maybe 150 Kurds marched in front of the centre and taunted us until a fight began. There were many of them, so we had to run into the building and barricade the doors and call the police,” he said.

“These people were Kurds from Iran and Iraq. I heard them speak,” said Ismail Zengin, 57, who runs the centre along with Kayhan. His opinion was echoed by groups of men at the nearby Anatoliska Kurdiska who said that locals would not have attacked each other. Kurdish groups also confirmed that Kurds from Iran, Iraq and Syria were all present at the demonstration, which had nothing to do with the centre.

Indeed, roughly one third of the 25 men seated at the centre were Turks. Likewise a small group of Kurdish men had helped clear away the debris from Wednesday's blast.

“We've grown up together, over there and here. We try to help each other,” said Haydar Bayraktar, the Kurdish manager of the centre.

There are no official figures for the number of Kurds in Sweden, but local groups place the number at around 100,000. There were about 46,000 people born in Turkey living in Sweden in 2014, according to Statistics Sweden.