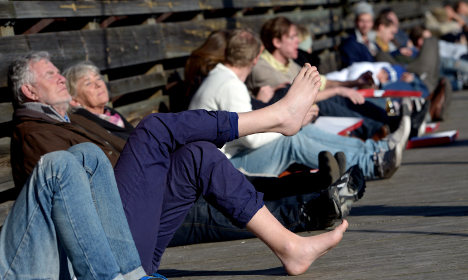 But while anyone living further north than Stockholm will do well not to hang up their winter jacket just yet, in southern Skåne temperatures have indeed been hovering steadily at around 0-6C for the past six days.

“Meteorological spring falls if the average daily temperature has remained at or above zero on seven consecutive days. It also has to fall after February 15th,” forecaster Charlotta Eriksson explained to regional newspaper Skånska Dagbladet on Monday.

To make matters even more confusing, once meteorologists have agreed that spring is in fact here, its formal arrival date is counted as the first day of the more temperate spell.

So, if the mercury remains above freezing at SMHI's southern Falsterbo and Skillinge weather stations until Tuesday morning, it means that spring officially arrived in Sweden on February 17th.

A cold snap at the start of the year aside, Sweden has enjoyed a milder-than-usual winter, with one Nordic snow car race almost getting cancelled because of an unexpected lack of the white stuff.

But in many parts of Sweden there is still ice on the ground, and the majority of people will likely face another few weeks' wait before they can dig out the sunglasses from the back of their wardrobes. Spring usually arrives in the Stockholm area in March and as late as April or even early May for the far north.