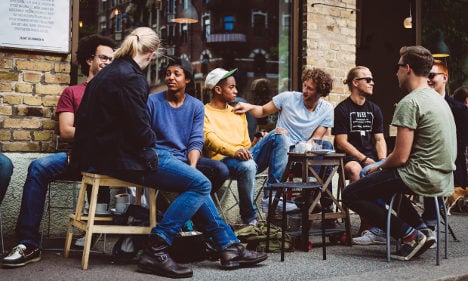 A group of friends in Gothenburg. Photo: Faramarz Gosheh/Image Bank Sweden
1. There are more men than women in Sweden
Women long outstripped men in Sweden but that all changed for the first time in history last spring. Statistics Sweden's annual report shows that the total population in Sweden at the end of 2015 was 9,851,017. This includes 58,726 more men than in 2014 and 44,936 more women.
More boys than girls are born every year in Sweden, but they are usually outlived by women, giving the nation’s female population the edge in terms of numbers. But the report's authors say that things have shifted due to rising immigration, with more men than women travelling to Sweden to seek asylum and find work. A group of male friends in Stockholm. Photo: Simon Paulin/Image Bank Sweden
2. Fewer Swedes are getting married
Swedes have a global reputation as being sexually liberal and by law partners who co-habit (known as 'sambo') have similar rights to married ones. That didn't stop 52,314 couples walking down the aisle in 2015. However, it was still 799 fewer than in 2014.
Nevertheless plenty of Swedes proved that they are traditionalists at heart; the most popular day of the year to get hitched was June 13th, the same date as Prince Carl Philip and Sofia Hellqvist. Others promoted the stereotype of Swedish efficiency, with 440 opting for 'drop-in' ceremonies at Skansen, Sweden's largest open-air museum. Prince Carl Philip and Sofia Hellqvist getting married in June last year. Photo: Jonas Ekströmer/TT
3. But more Swedes are going the distance
Sweden still has one of the highest divorce rates in the world, with almost 50 percent of marriages failing. But while the number of formal separations peaked at 26,143 in 2014, it dipped to 24,876 last year.
Statistics Sweden's report does not speculate on why fewer people chose to cut loose. But perhaps the acute housing crisis or the dismal, wet summer forced couples to spend more time together at home?

A couple taking a selfie in Sweden. Photo: Per Pixel Petersson/Image bank Sweden
4. The fastest-growing place is a small town called Knivsta
It's not just large cities such as Stockholm and Gothenburg that are expanding rapidly. In 2015, the population increased in 239 out of Sweden's 290 municipalities. A small town called Knivsta, near Uppsala, experienced the biggest percentage hike in the country, with its population expanding by 4.7 percent, with Sundbyberg, in Stockholm County, coming just behind with a rise of 4.6 percent.
Both places are popular with commuters squeezed out of the property market in central Stockholm. However Statistics Sweden's report suggested that the main reason for population growth across the country was due to immigration. The only place which didn't experience an uptick in foreign residents was Vaxholm, in the Stockholm archipelago. The town of Knivsta, between Stockholm and Uppsala. Photo: Wikicommons/Brorsson
5. Record numbers of people are leaving Sweden
While international headlines have focused on the record 163,000 people who sought asylum in Sweden in 2015, the number of Swedes who left the country also reached a peak.
Statistics Sweden's report states that 55,830 Swedish residents moved away from the Nordic nation, more than at any other time in the last 160 years. However only 18,452 of those who left Sweden were born in the country, suggesting that this group also includes a large proportion of foreigners.
The most popular destinations for Swedes seeking new lives abroad include the US, the UK and Spain, according to separate figures released by the by the non-profit organization Svenskar i världen (Swedes Worldwide) last year.