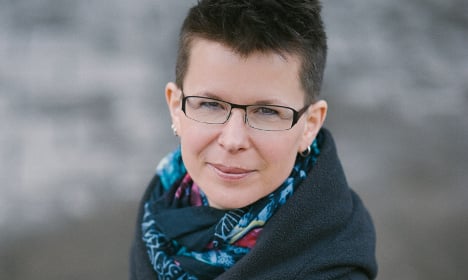 Caroline Holt, who is based in Stockholm. Photo: Birgit Walsh Photography

Holt moved to Stockholm, Sweden in 2007. Eight years later she has a family of five, a photography business and a drive to capture the simple and daily moments of families daily life.

The German creative met her British husband while on vacation in Greece back in 2006. With her new-found love already living in Sweden, it only took one year for her to join him.

“We were travelling forward and backwards for a year and then I moved here 2007,” Holt tells The Local.

Holt says she has always been interested in photography, but it was not until she moved to Sweden that she really began to turn her hobby into business. She had her first child in 2008 and right before the birth, she got a digital camera so she could capture the memories of her family. Family is important to Holt and she has worked with children for many years. In Germany, Holt had a job as a social worker. In photography, her main focus is also on families.

“I love to meet people, connect with them and get to know them and their stories. Photography is my medium to tell the story,” she says.

But there is also another reason why photography is important to Holt.

“I have a very bad memory and for me it’s like 'freezing in' some memories with photography. I take pictures so I can remember,” she explains.

When asked if there is a reason for her bad memory, she becomes quiet for a second and chooses her words carefully to avoid disclosing too much of her private life and background.

“I don't know. I lost my father very early, when I was 10. So all my memories I have from him comes in pictures,” she says.

“I think that was quite a traumatic experience for me of course, so I think that’s why my memory is also a little bit disturbed.”

Holt explains she did not realise how important the photos from her childhood would be for her in the future.

“When I then had children myself I realised how important that was. Having those pictures.”

She adds that she thinks it is important that the whole family is in the pictures, since the photos from her childhood mostly involve her and her sibling.

“Most people do that. They take a lot of pictures of their children and forget about themselves.” In 2014, she started her business Caroline Holt Photography, where she focuses on capturing the everyday moments families experience. Her business does not only focus on still photos, but also on documentary filming, following the families around in their natural environment.

“We talk beforehand about what they usually do with the family and they plan some activity they like doing and then I follow them,” Holt explains.

“I go to their home and I capture whatever they are doing and I do portrait sessions as well outside but they are also very playful and with hardly any posing. A little bit of directing maybe.” Holt enjoys living in Sweden and thinks that Swedish people are nice and friendly, but hard to become friends with.

“In general I enjoy it. The culture is a bit different from Germany and the climate. What gets to me is that winter is much longer.”

When it comes to how to get into the Swedish society, Holt says it is important to find different ways to socialise and learn the language, even though it is easy to get away with only speaking English.

“It’s easy here with English and a lot of people think they can get away with English and they do, of course, most Swedes are happy to speak English to you. But I find it important that we also make that step. I can only recommend making that effort,” she says.