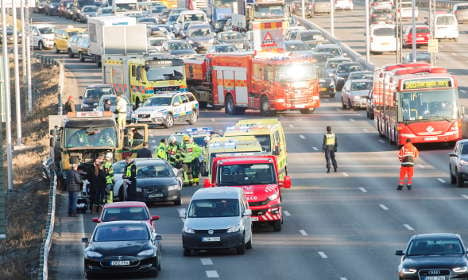 The crash on the motorway near Stockholm on Thursday. Photo: Fredrik Sandberg/TT

Police described the scene immediately following the crash as “chaotic”.

He said the accident happened after the truck driver suffered sudden illness behind the wheel and crashed into the side of another car just after 8.30am on Thursday.

“He was taken to hospital because of heart problems and that was also what caused the accident,” said Näverberg. Emergency services at the scene of the crash. Photo: Fredrik Sandberg/TT

The girl was not understood to be seriously injured.

“She experienced pain to the back of her head and was taken to hospital just to be sure.”

The crash, which took place in Solna just north of Stockholm, caused the motorway in southbound direction to close temporarily and sparked heavy delays for commuters heading to the capital via the busy road.

At around 10am four out of five lanes had re-opened to traffic.

Sweden has one of the best road safety records in the world, but the morning's incident comes less than two weeks after British indie pop band Viola Beach tragically died after their car plummeted from a bridge in Södertälje. A preliminary report into the accident was released on Thursday.