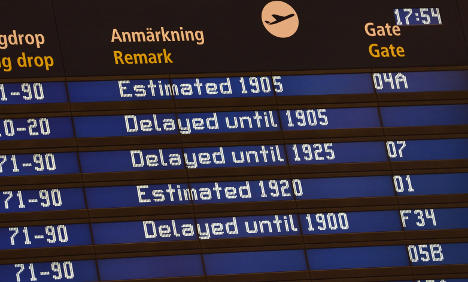 Pilots from six different airlines have expressed their sympathies for staff employed by an international recruitment firm which hires cabin crew for SAS, Scandinavia's largest airline.

The recruitment company said on Tuesday that it had reached an agreement over pay and conditions for cabin crew following two days of strikes affecting more than a thousand passengers flying on domestic SAS routes in Sweden as well as some services to Finland.

However on Thursday it emerged that relationships between staff and the hiring firm remained tense as 900 pilots from six airlines announced that they were joining a dispute over the schedules of their contracted cockpit counterparts, who are working under different schedules and terms to permanent colleagues.

“As it is now, GEC has the ability to schedule them to work for up to 13 hours with only a short meal break of 20 minutes during a flight,” said Tommy Larsson, a negotiator for the Swedish pilot's union SPF, in an interview with the TT news agency.

The airlines involved in the sympathy action are Tuifly, Novair, Malmö Aviation, Braathens Regional and Amapola, as well as SAS.

Swedavia, the company that operates ten of Sweden's airports, told TT that it was unclear how the row might affect Nordic travellers.

“We are finding it a little bit difficult to predict exactly how it will have an impact,” said press officer Henrik Kelve.

“The conflict is something complicated and we do not know if other airlines can bring in other staff to go on another contract.”

Six SAS flights between Stockholm and Ronneby, Åbo and Vasa had been cancelled by 8am.

However Novoair and Malmö Aviation said they believed all of their services would operate as planned.