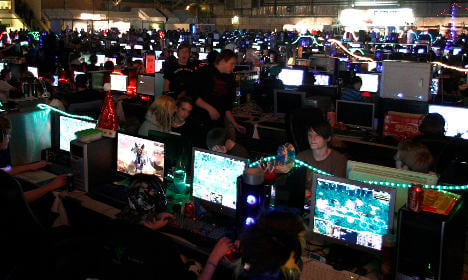 Swedes are among the most digitally connected peoples in Europe. Photo: Mikael Fritzon/SCANPIX

Sweden was given an overall score of 0.67 (with 1.0 being the maximum score possible) in the European Commission's annual report on digital services in Europe, the Digital Economy and Society Index (DESI), down from its second place in the survey last year.

Researchers measured connectivity (how accessible and affordable broadband is), internet skills, how frequently Europeans use the internet for key activities such as online shopping and accessing news and how well developed digital technologies and digital public services were in each member state.

Neighbouring Denmark topped the rankings, with an overall score of 0.68. A graph published on Twitter shows Norway, which is in Europe but not a member of the EU, is a close second. The Netherlands, Finland and Belgium also made it into the top-five.

Just like last year, Sweden was especially praised for making fixed broadband available to 99 percent of homes, even in rural parts of the country – “a remarkable outcome given Sweden's geographical configuration”, said the report.

But despite the Nordic country's reputation as a tech-savvy location that is popular with international startups, the report warned that it could soon find itself outperformed by its European neighbours who are all improving faster than Sweden.

“Sweden falls into the cluster of 'lagging ahead' countries, scoring above the EU average but with below average growth from last year,” it wrote. “These countries perform well, but their development is now very slow and, as such, they are lagging in comparison to the progress of the EU as a whole.”

The study also reiterated findings suggesting that Swedes were more actively engaged in online activities than many of its neighbours, with 92 percent of Swedes using the internet.

In addition it found that six percent of the total workforce are ICT specialists, which is well above the EU average. However, it said that demand for skilled professionals outstripped supply, which is good news for foreign ICT experts hoping to make a career for themselves in Sweden.

Sweden has long been a pioneering high technology nation and its capital Stockholm is set to be one of the first cities to have 5G mobile network rolled out in 2018. But other experts have also previously warned that progress could stall if more decisive action is not taken.