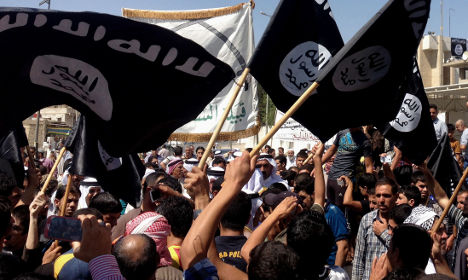 File photo of an Isis demonstration in the city of Mosul. Photo: AP Photo

“We can confirm that an underage Swedish citizen and her family are back in Sweden, which is of course pleasing,” press spokesperson Veronica Nord told regional newspaper BT.

“This has happened in cooperation between Swedish as well as international authorities.”

News of the teenager's return to Sweden comes three days after the Kurdistan Region Security Council announced that its troops had liberated the girl near the Isis-occupied city of Mosul in northern Iraq on February 17th.

In a post published on Twitter, it wrote that it “was called upon by Swedish authorities and members of her family to assist in locating and rescuing” her from Isis.

But Swedish officials would not elaborate on the details of the rescue operation. When asked why it had taken more than a week for the girl to be able to return home, Nord replied: “That's not something I can offer any information about.”

The girl, from the south-western Swedish town of Borås, travelled with her 19-year-old boyfriend to the Middle East at the end of May last year, where he is said to have joined an extremist group.

“He said he wanted to go to Isis. (…) I didn't know anything about Islam or Isis so I didn't understand what he meant,” the girl told a Kurdish news channel in an interview earlier this week.

But she was later able to contact her family after being secretly lent a phone from a woman in Syria and told her mother she was being held by the radical Islamist group and wanted to return home.

She is understood to have given birth to a son in November. According to unconfirmed reports by Swedish tabloid Aftonbladet, the male teenager was killed in a Russian air raid on the Iraqi city of Ramadi.

While much behind her journey to Syria and Iraq remains unclear, news of her situation follows a rise in young people making the journey from Scandinavia to the Middle East to join radical groups.

Sweden's Security Service, Säpo, does not comment on individual cases but has previously said that up to 300 Swedes are believed to have travelled to the region to fight in the past three years. Around 40 are thought to have died in battle and around 125 are understood to remain in Syria and Iraq – 90 men and 35 women.

In May, Magnus Ranstorp from the Swedish Defence University told The Local that while some women and teenagers were persuaded or forced to travel to the Middle East by friends and family members, others “look up to the fighters like pop stars” and leave home of their own accord.