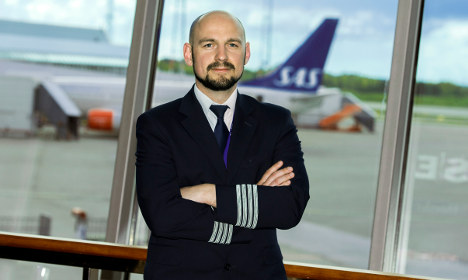 Following key talks the pilots' union, Svensk Pilotförening (SPF), announced on Friday that it had reached an agreement with the international recruitment firm at the centre of the latest airline row in Sweden.

“It's very important for our members' long-term health that there is a collective agreement which secures a good working environment,” said union chairman Martin Lindgren in a statement.

The conflict began when 900 pilots got involved in the row over staff wages, which led to 16 departures being cancelled in Sweden on Thursday, including domestic flights and flights to Finland.

It centred on staff employed by an international recruitment firm which hires pilots for SAS, Scandinavia's largest airline. Global Employer Company (GEC) takes on workers for the British low-cost carrier Flybe, which in turns makes them available for SAS flights.

The recruitment company said on Tuesday that it had reached an earlier agreement over pay and conditions for cabin crew following two days of strikes affecting more than a thousand passengers flying on domestic SAS routes in Sweden as well as some services to Finland.

However on Thursday pilots from six airlines (Tuifly, Novair, Malmö Aviation, Braathens Regional and Amapola, as well as SAS) announced that they were joining a dispute over their contracted cockpit counterparts, who were working under different terms to permanent colleagues.

“We have now been able to ensure that Flybe/GEC pilots are subject to conditions well in line with the rest of the pilots,” said Tommy Larsson, SPF's lead negotiator, after the crunch talks on Friday.

The deal struck includes an agreement on pensions and increased flexibility regarding scheduling and holidays.

“We are pleased to finally be able to sign a collective agreement for pilots employed by GEC. We have worked to reach a solution for several months,” said Elisabeth Holming-Schiller, leader of the transport organization representing airline bosses in the talks.