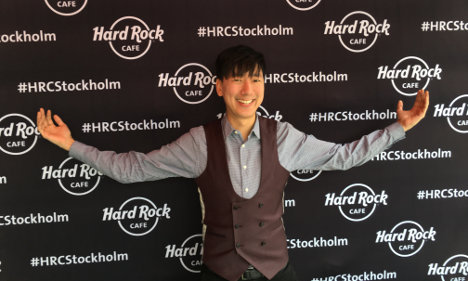 Kevin Lee at the Hard Rock Cafe in Stockholm.
Unlike many expats and immigrants living in Sweden, Canadian-born Kevin Lee was never fazed by the Nordic nation's harsh climate and fondly remembers the first time he stepped off a plane and arrived in Stockholm.
“It was the middle of winter and it was so beautiful,” he tells The Local.
“I just remember loving the Old Town and the feeling of having all these islands and water, but at the same time everything was so modern.”
As for the sub-zero temperatures, “Stockholm feels tropical compared to parts of Canada”, he says with a laugh.
Lee's initial visit to the Swedish capital was during a year he spent living and working in London, having quit a career in television production in Toronto that he had pursued relentlessly between the ages of 16 and 23.
Despite being offered a full-time job working on Canadian Idol, one of the highest-rated shows in his country at that time, the music-obsessive had decided that if he didn't pursue his other dream in life – to travel in Europe – he would never end up leaving his home country.
“I thought that if I took the decision that age, it [television] would be everything I dedicated my life to until I retired, that it would be the be-all-and-end-all,” he explains, admitting that plenty of his colleagues and family members were bemused by his decision. Kevin Lee at a comedy event in Stockholm. Photo: Private
But the risk clearly paid off. Lee enjoyed seeing as much of Europe as possible during his time in London and when he started getting itchy feet again he decided to relocate to Sweden for a while. He loved it so much that five years later he is still here.
Now head of sales and marketing at Stockholm's Hard Rock Cafe, Lee worked his way up from being a waiter, a job he had done for years back home in Toronto, alongside his studies and the unpaid work experience he needed in order to break into the media industry.
“No matter where you go in the world, there is always someone who wants to be served. If you've been a waiter it means you've always got something to fall back on,” explains Lee.
“But I was prepared to do anything. Be a cleaner, do night shifts, anything (…) I am really thankful that Hard Rock gave me a chance.”
After spending his time off studying Swedish at the country's state-funded SFI classes, he says he “started loving Sweden even more” and embraced learning about the nation's culture and customs as well as its language.
A long-time lover of black clothes and Converse trainers, he jokes that he already had Sweden's fashion sense nailed before he moved here, and says his shared love of understated style immediately made him feel “comfortable with Sweden as somewhere that could be a base”.
Lee's role at the Hard Rock Cafe has also allowed him to continue his interest in the entertainment industry. It is run by Richard Herrey who helped Sweden win the Eurovision Song Contest in 1984 with the cult hit 'Diggi-Loo Diggy-Ley'. The Canadian is helping to organize a number of events to coincide with Stockholm hosting the competition later this year, after Måns Zelmerlöw's victory with 'Heroes' in 2015.
“We want to do as much as possible for fans who are coming, so they can see different parts of the city,” he explains.
In the meantime, Lee is hooked on Sweden's prequel to Eurovision, Melodifestivalen, and is currently travelling around the country at weekends to watch and make videos about the heats that will decide who the Nordic country's 2016 entry is.
According to Lee, “the Eurovision community is really something special that extends beyond borders and it feels great to be part of that”.
READ ALSO: Meet Sweden's Eurovision 2016 hosts Kevin Lee loves karaoke and stand-up comedy. Photo: Private
By contrast, the 31-year-old admits that while he has made plenty of connections in Sweden – through work, the Melodifestivalen circuit and doing English-language standup comedy as a hobby – he believes he still only has a handful of Swedish friends that he can really count on. The ex-waiter warns other foreigners planning a move to Scandinavia to be prepared for a place that is “not as friendly as Canada or as open as London”.
“It is harder to meet people in Stockholm. In London I had a great wide group of friends – 30 to 40 – and even when I see them now it's like we have never been away from each other. I have lived here far longer and I don't have that. That doesn't mean that I necessarily want to have more – I am very happy with the friends I have here – but it does put things in perspective.”
Lee, whose parents are from South Korea, says he is also concerned with “growing racism” in Sweden. While he does not personally feel that he has been discriminated against, he argues that “the migration issue and everything with asylum seekers is tearing people apart in Europe” and says he is concerned for the future of the “leftish, socially focused” country he fell in love with.
“For the moment though, I still feel comfortable and it feels like somewhere I can really be long-term. I don't like talking about 'forever', but maybe, maybe not,” he continues.
“I will never regret moving to Sweden.”