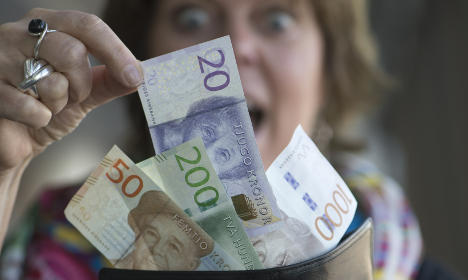 Swedish kronor notes. Photo: Fredrik Sandberg/TT
There was a 4.5 percent boost last year in the Nordic country's GDP, one of the key indicators used to gauge the health of a nation's economy.
New figures released by the country's state-funded number-crunching agency Statistics Sweden also reveal that economic growth was up by 1.3 percent during the last quarter of 2015. It was the fifth quarter in a row that Sweden experienced a rise of more than one percent.
“It was expected that it would be strong, but it was still a bit stronger than most had expected,” the chief economist of Scandinavian bank Swedbank Anna Breman told Swedish news wire TT on Monday.
Meanwhile the nation's leading business daily, Dagens Nyheter, described the reported GDP as “stronger than experts' wildest fantasies”.
The National Institute of Economic Research (NIER), which analyses economic forecasts for Sweden, announced in December that it believed GDP would reach a maximum of four percent, rather than the 4.5 percent reported by Statistics Sweden on Monday.
Statistics Sweden said that the bigger than anticipated growth was partly due to Swedes opening their wallets, with a healthy 0.9 percent rise in household consumption recorded. Meanwhile, exports from the Nordic country increased by almost three percent.
Unemployment continued to remain low, with a 0.7 percent increase in the number of people in work in Sweden compared to the end of 2014.
READ ALSO: Why Sweden's economy is set to boom in 2016
“What I think is positive is that there are many factors that contribute to there being a high growth, both in exports, consumption and investment,” added Breman.
“For a long time, since the financial crisis, it has been mainly the consumption that has driven Swedish growth,” she continued.
Andreas Wallström, chief analyst at Nordea Bank, told the AFP news agency that he was also shocked by the growth rate and linked it to rising immigration to Sweden.
“As for GDP components, all underlying components surprised on the upside in Q4 … underlining that growth is broad based,” he said.

“Public consumption was probably lifted as a result of the influx of refugees. The immigrant situation will probably boost government consumption and GDP also in the coming quarters.”
READ ALSO: Refugee crisis could boost Swedish economy
However experts suggested that growing global jitters linked to a slowing growth in China – the world's largest economy – and the possibility of the UK leaving the European Union could influence whether or not Sweden remains on a roll in 2016.
“If you look out to the world, it's unfortunately looking very anxious. Unfortunately, Sweden usually follows when it gets worse in the outside world. We have very good prospects for continued good growth, but in this kind of situation, one can't have the security and believe that things will now continue at these levels,” said Breman.
Earlier this month, the Swedish central bank cut its key interest rate by 15 basis points to an all-time low of -0.5 percent, citing the risk of slowing inflation and falling confidence in its monetary policy.