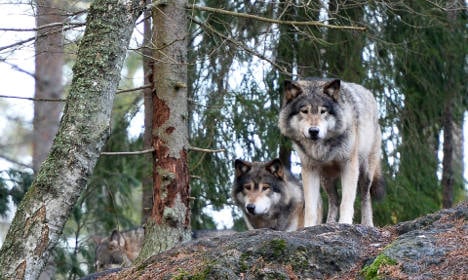 The short video clip shows the wolf quietly walking past the hidden camera put up by county authorities in a nationwide move to count the number of wild animals in Sweden.

It was caught on camera in the southern Skåne region, where wolves are still believed to be very rare, but has seen a rise in members of the elusive pack of predators straying south.

“Everything indicates that this is the same wolf that has moved around in the area for some time,” said the county authority Länsstyrelsen Skåne's wildlife officer Nils Carlsson when he shared the video online.

It was filmed on February 24th in a rural part of north-eastern Skåne, close to the village of Lönsboda, but was only published on the county board's homepage on Monday.

“We have also secured droppings from the wolf, which we have sent for analysis. Soon we shall know the wolf's gender and where it comes from,” added Carlsson.

Monday's video comes just a couple of weeks after a similar film of two young lynxes went viral in Sweden and beyond, with many curious international observers going online to watch the rare clip.

Sweden has been seeing a hike in the populations of bears, lynxes, wolves and wolverines – the four major predator species in the Nordic country – in recent years after a dip earlier in the millennium.

Sweden's Environmental Protection Agency estimates that the wolf population stands at just over 400, and recommends it be kept at that level through regulated hunting, a topic of heated debate in the Nordic country.