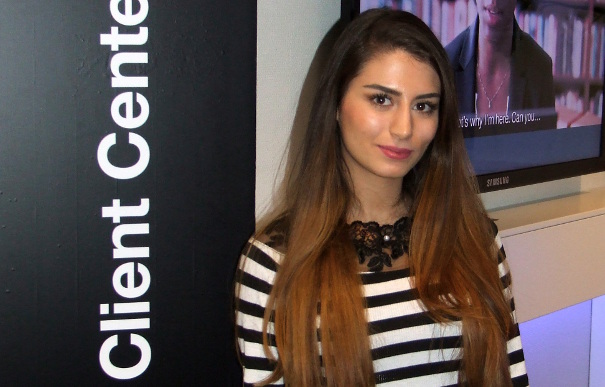 When in the presence of Joumana Kouria, it’s hard not to be inspired by her energy. Her expression is serious, yet warm. You can feel her confidence and focus.

“I believe that for any human being, once he or she has worked hard and accomplishes something, nothing seems to be impossible, and I am happy for that,” she says.

And in the little more than a year and a half she’s been in Sweden, she’s put the focus to good use, completing SFI language classes in only three months before securing an internship at one of the largest IT companies in the world – IBM.

These days she splits her time between her home in Hässelby, north of Stockholm, and her office in Kista, another north Stockholm suburb sometimes referred to as the ‘Silicon Valley of Sweden’.

While Joumana’s success in entering the Swedish workforce may have happened faster than it does for many newcomers, it didn’t happen overnight.

“Soon after I arrived in Sweden I felt like I needed to take responsibility for my life,” she recalls. “I figured I might as well use the time I had waiting for a decision about my residence permit to start learning Swedish on my own.”

Joumana’s Swedish skills advanced far enough that she was offered an internship as an administrator at a construction company, and four months after that, she formally enrolled in SFI.

Upon completing SFI, she moved on to SAS (Svenska som andra språket – Swedish as a second language) classes when her case officer at the employment agency told her about a program called Korta Vägen at Stockholm University.

“There is a list of companies involved in the program and students can register their preferences for where they’d like to work. I chose IBM,” she explains. After a couple of interviews with different managers, Joumana was offered an 8-month long internship at the US computing company in August 2015.

Her main responsibility is creating apps using IBM's Bluemix cloud development platform, and then presenting the apps to clients.

“The job has been challenging, but it's also helped give me confidence that I can handle what's expected of me,” she says.

Indeed, her life in Sweden is “totally different” than the life she led as a university student before leaving Syria.

“It was beautiful; lots of hanging out with friends and my family handled everything,” she recalls.

But much of that family support she'd grown used to vanished with the onset of violence and her family's relocation to Sweden, forcing Joumana and her family to go through a rather jarring transition.

“Here I have to take on much more responsibility and be more self-reliant,” she explains.

She doesn’t like to dwell much on the difficult journey that took her from Syria to Lebanon and finally to Sweden.

“Like so many others, we left our city because of chaos and fear,” she says.

So far, Joumana is positive toward the experience she’s had with Swedes and Swedish culture.

“There is no pretense and people are genuine and relaxed, and that’s wonderful,” she says. “There’s very little gossip.”

But sometimes she’s left feeling that there may be too little chatter among Swedes, whom are often “lukewarm” in social situations.

“It’s hard sometimes as the Swedes don’t always seem to be very social; they are sort of in their own world.

“It’s like they are in a never-ending yoga trance,” she says with a laugh.

Having started to establish herself in Sweden, Joumana prefers to look to the future rather than the past – a future she anticipates will include a semester or two at the Royal Institute of Technology (KTH) in Stockholm so she can finish the university studies that were interrupted by war in Syria.

When asked what advice she’d give to other newcomers, she is quick to point to the importance of getting an internship (praktik), not only for professional development, but also for helping to “learn the Swedish language properly”.

“Even if you are studying at SFI, it’s important to keep looking for work,” she explains. “And you also need to be flexible and adapt to local customs and values in order to integrate.”