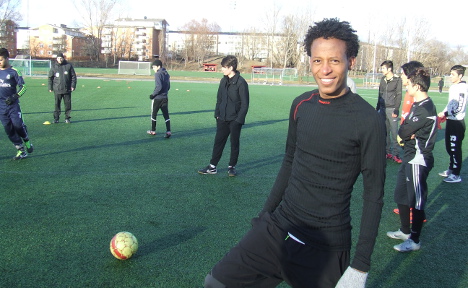 It’s a brisk February afternoon in Järfälla, a municipality north of Stockholm with more than 70,000 residents.

The sun is shining, and while the temperature may not be much above freezing, the smiles and laughter of two dozen or so teenage footballers running on the pitch make for a warm atmosphere.

“Today is my first day here, and I’m excited,” says 16-year-old Nazir. “Before this, I didn’t go to play football anywhere.”

Nazir, who comes from Afghanistan and has been in Sweden about three months, is one of several dozen youngsters who gather on weekday afternoons to play the game they love through a recently started project called Järfälla Fotbolllsplugg (‘Football school’).

“We noticed there was a need in the municipality for some kind of activity for these kids,” says Riad Chammas, a volunteer coach with one of a local football club and one of the organizers of the project.

“While Swedish and refugee children do go to school for part of the day, but after school the refugee children didn’t have anything to do.” Like so many municipalities in Sweden, Järfälla also experienced sharp rise in the number of refugees in recent years. Players await their turn in the next football drill

According to statistics from Migrationsverket, Järfälla accepted 340 refugees in 2015, compared to only 60 in 2011. Currently, the municipality also operates a refugee housing facility on behalf of Migrationsverket. Local officials are also supported Fotbollsplugg by allowing them to use the artificial turf without having to pay the rental fees normally charged to local football clubs.

On this day, Chammas, who was born in Syria but has lived in Sweden for more than two decades, spends time helping some of the first-time participants get oriented to the day’s drills.

“Long term, our intention is to have the afternoon practices include a mix of Swedish and refugee kids,” he explains.

“If you want people to integrate, it’s not good to have big groups of them roaming around with nothing to do. But now we already have more than 40 kids participating, which is great. And they really like it.”

Indeed, there is an ample supply of positive energy and friendship on the pitch.

“It’s good. I like playing football with these guys,” says 16-year-old Jamshid from Afghanistan, who lists Portuguese international and Real Madrid star Cristiano Ronaldo as his favourite player.

Zia, 17, also comes from Afghanistan and is a fan of Ronaldo. He’s been coming to Fotbollsplugg for two weeks.

Zia shows off a poster of his favourite player

“Now we come here all the time after school and play,” he says during a break between drills. “I really love football.”

A few metres away, 15-year-old Brhane Shewit of Eritrea is getting some good touches on the ball on his first day with the group.

He’s been in Sweden for four months and is living in a refugee housing facility in Järfälla where he otherwise has “nothing” to do outside of school.