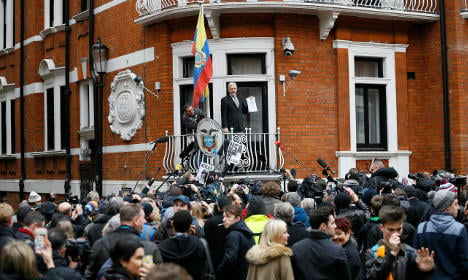 The celebrities were among 500 signatories of a petition to Britain and Sweden, urging them to enforce a UN panel opinion from last month that said Assange was being “arbitrarily detained”.

“We urge Sweden and the United Kingdom to respect the binding nature of the human rights covenants on which the decision is based,” read the petition, details of which were released by Assange's spokespeople.

Assange is wanted on a European arrest warrant for questioning in Sweden over a rape allegation.

He has denied any wrongdoing and has said he fears extradition for prosecution in the United States after WikiLeaks published hundreds of thousands of secret military and diplomatic documents on the wars in Afghanistan and Iraq and US diplomatic activity.

Assange exhausted all legal appeals against extradition from Britain in 2012 and fled to the embassy of Ecuador, which granted him asylum.

He has lived since then in an office in the embassy which he has turned into his living quarters.

British police have said they will have to arrest him as soon as he sets foot out of the embassy building because of the arrest warrant out against him.

In a phone interview with AFP last month, Assange said the findings of the UN Working Group on Arbitrary Detention should be respected.

“I am confident that the decision will be enforced,” he said, adding: “Ultimately there are a number of different enforcement mechanisms, up to sanctions.”

Britain and Sweden have both rejected the panel's findings, which they say are not legally binding.